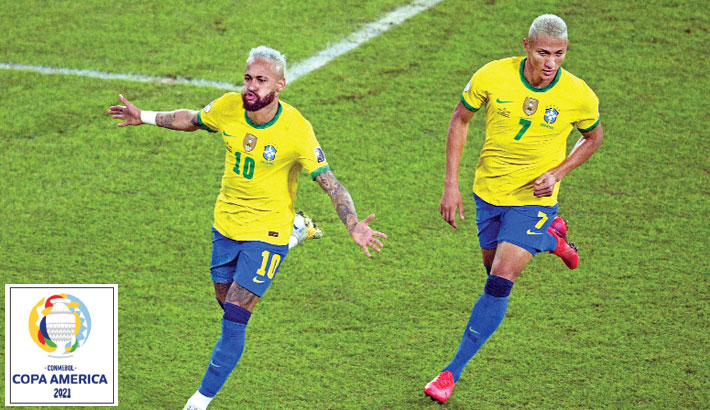 Hosts Brazil continued their perfect start to the Copa America as goals from Alex Sandro, Neymar, Everton Ribeiro and Richarlison gave them a 4-0 win over Peru in Rio de Janeiro on Thursday.

It was a ninth straight win for the Selecao who top Group B with a perfect six points from two games, while Peru fell to the bottom.

There was little between the two sides in the first half but Brazil's greater quality made the difference after the break as talisman Neymar inspired them to an ultimately comfortable victory.

The Selecao were in front in the 11th minute as Gabriel Jesus picked out Alex Sandro arriving unmarked six yards out to fire home.

Brazil thought they had a penalty on the hour mark when Neymar tumbled in the box under pressure from Renato Tapia, but as the Paris Saint-Germain star waited to take the spot kick, Argentine referee Patricio Loustau went over to check the pitchside monitor and reversed his decision.

Neymar didn't have to wait long for his chance to score, as Peru turned over possession in midfield on 68 minutes and Fred played the ball into the striker, who turned quickly to fire low past goalkeeper Pedro Gallese from 20 yards.

Neymar and substitute Roberto Firmino had chances to wrap up the win but the third goal finally came a minute from time as Richarlison teed up another substitute in Everton Ribeiro to tap home from six yards out.

And Richarlison got the goal his fine cameo deserved in stoppage time.

Venezuela held out under intense pressure in a fractious local derby against Colombia to secure their first point at the Copa America after a 0-0 draw in Goiania.