3,545 more houses to be distributed in three dists 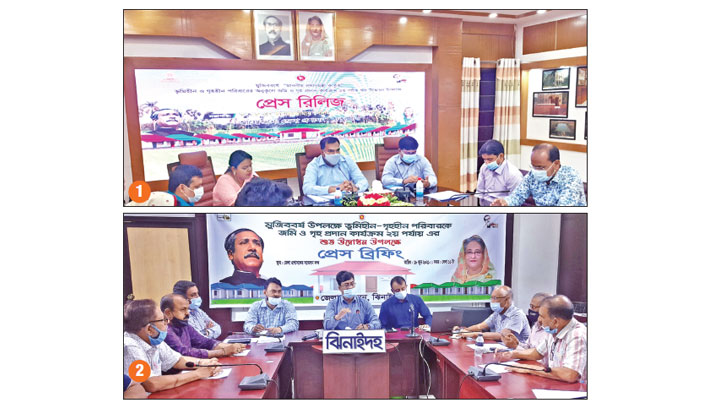 As part of the government’s campaign to bring all landless and homeless families under housing facility, a total of 3,545 houses in the second phase will be handed over among the poor people in Khulna,  Chapainawabganj and Jamalpur districts.

In Khulna: A total of 1,351 landless and homeless families of the district will get second phase houses on Sunday, highest of the division, as a gift from the Prime Minister Sheikh Hasina on the occasion of ‘Mujib Barsho’.

The government will provide 53,340 more houses to the landless and homeless families as part of its campaign to bring all such families under the housing scheme during the ‘Mujib Barsho’(Year) across the country.

Prime Minister Sheikh Hasina is scheduled to inaugurate the distribution of these houses virtually on 20 June under the second phase of the Ashrayan-2 project.

The construction work of the houses has been completed in all upazilas of the district. After completion of agreement and mutation, two hundred acres of land with newly constructed homes are ready to be transferred to the beneficiaries, the briefing said.

In Chapainawabganj: As per the Prime Minister’s directive that no one will remain homeless on the occasion of Mujib Barsho, a total of 1,419 more houses would be distributed in second phase among homeless people in Chapainawabganj district under Ashrayan Project.

Prime Minister Sheikh Hasina is likely to inaugurate the distribution through a virtual meeting on June 20.

Deputy Commissioner of Chapainawabganj Md Monjurul Hafij informed this at a press briefing on Thursday.

In Jamalpur: As part of the government’s campaign to bring all landless and homeless families under housing facility, a total of 775 houses in the second phase will be handed over among the poor people in the district.

Deputy Commissioner Mursheda Zaman in a press briefing on Thursday said Prime Minister Sheikh Hasina will inaugurate the programme of handing over the houses among the homeless people on June 20 through video conference.

The DC said construction work of the houses has almost been completed. The work on setting up electric connection and installing of tube well for drinking water is progressing fast, she added.

District Relief and Rehabilitation Office sources said under the shelter project of Prime Minister Sheikh Hasina, the houses were constructed to rehabilitate landless and homeless people in the district.

Disaster Management and Relief Ministry has allotted Taka 14 crore 72 lakh 50 thousand for implementation of the shelter project in phase two.

Each semi-brick building with corrugated iron sheet roof house on two decimal of Khas land was constructed at a cost of Taka 1,90,000.

After inauguration registered deed of the houses and land will be handed over to the beneficiaries.

However, in first phase 1478 landless and homeless families got houses in Jamalpur on January 23, 2021.