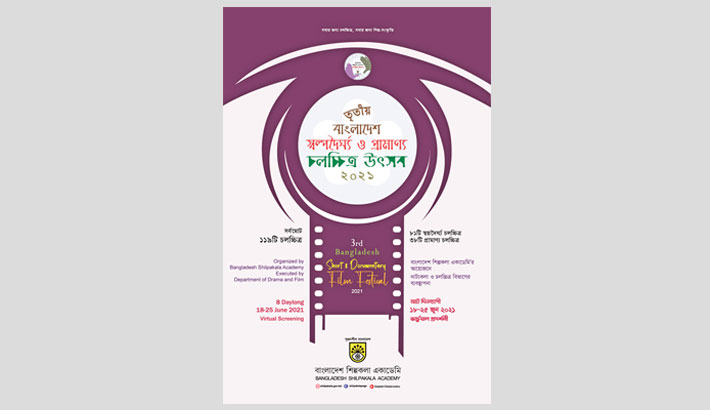 The 3rd Bangladesh Short and Documentary Film Festival 2021 began on Friday. Organised by Bangladesh Shilpakala Academy (BSA), the 8-day virtual film festival will continue till 25 June. This year's festival has been dedicated to the first filmmaker in the sub-continent Hiralal Sen.

A total of 119 films have been selected to shown at the festival. Among the films, 38 are documentaries and 81 are fiction films. The festival will also feature three masterclasses. These masterclasses will be conducted by Amitabh Reza Chowdhury, Shabnam Ferdousi and Lawrence Apu Rozario.

14 awards will also be distributed in the festival in seven different categories for both short and documentary films. Among them, the best film will receive Tk 1 lakh and 25 thousand, best filmmaker will get Tk 1 lakh and the special jury award winner will get Tk 50,000.

Bangladesh Shilpakala Academy introduced this festival to provide a platform for young filmmakers to showcase their talent. BSA organised the film fest in 2016 and 2018 across all the 64 districts of Bangladesh.