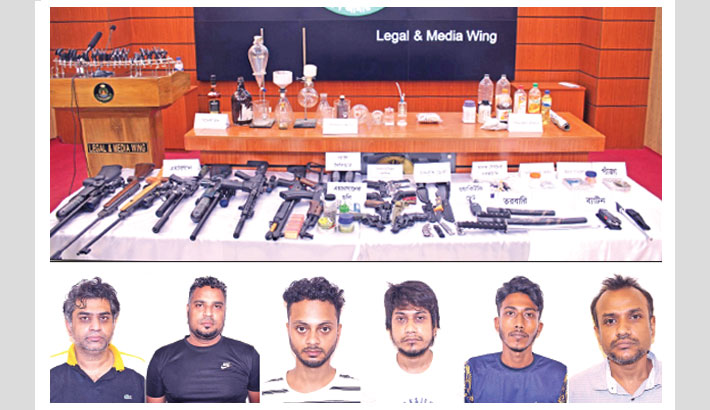 RAB seizes foreign and replica firearms, Ice, Yaba tablets, foreign wine, ganja and equipments of meth lab during a raid at a house in the capital’s Uttara area on Thursday and arrests six drug dealers in this connection. —SUN photo

Rapid Action Battalion (RAB) has busted an illegal drug making lab and arrested six drug dealers with 13 firearms from Uttara in the capital.

He said that acting on a tip-off that a gang set up a meth lab and producing Ice, Yaba and some other illegal drugs in the city, the RAB began to investigate the matter and found truth.

Later, a team of the RAB-3 conducted a raid at a house in the area and arrested them and recovered 13 foreign and replica firearms, some Ice, Yabas, foreign wine, ganja, electric shock machines and equipments of the meth lab, he said.

He said that the arrestees and 10 to 15 others set up the meth lab. They produced adulterated Ice, Yaba, Jackie and some other drugs; they also conducted experimental activities for making exact Ice and Yaba.

They got rented a flat at Uttara in the name of setting up a buying house, but used it for taking drugs and anti-social activities, he continued.

In accordance with the officer, Tawfiq was the ringleader of the gang while Jubeain and Khaled financed to make the drugs while Ruddra ran the lab.  Sabuj and others supplied the drugs.  Ruddra is wanted in three drug related cases and JUbain in an attempt-to-murder case.

The RAB director said that they had been taking Ice for the last five years; they made youths addicts and blackmailed.