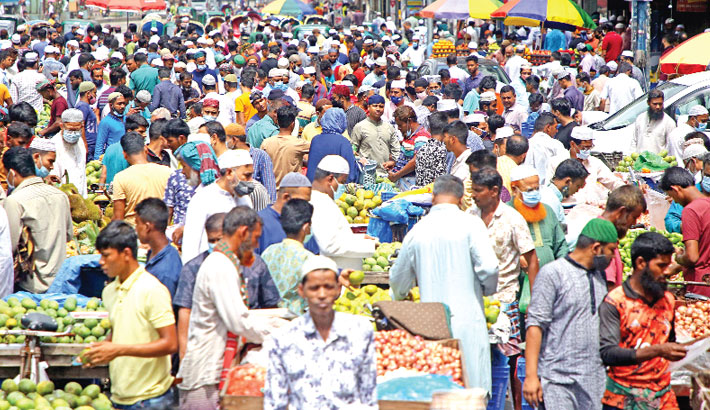 People don’t give a damn about maintaining health guidelines, including wearing masks and keeping distance with others, although the coronavirus situation has taken a serious turn in the country. The photo was taken from Nayapaltan area in the capital on Friday. — Sun photo

The country in the last 24 hours also witnessed a steep rise in positivity rate with 18.59% infections, which is the highest in 61 days.

According to Directorate General of Health Services (DGHS), total number of deaths from the deadly pathogen has reached 13,399 with 54 new deaths. The total death rate has stood at 1.59 percent.

Of the 54 deaths, 12 were reported from Dhaka division, 15 from Chattragram, 12 from Rajshahi, eight from Khulna, four from Barishal, two from Sylhet and one from Mymensingh division.

Some 1,955 more patients have recovered from the fatal disease in the last 24 hours, raising the total number of recovery to 7,78,421 in the country till the day. The recovery rate has stood 92.12 percent.

A total of 20,882 samples, out of 21,373 collected, were tested at 528 labs in the country during the period, the report added. A total of 62,88,539 samples have been tested so far to detect coronavirus infection across the country.

Speaking at a discussion in Garpara of Manikganj Sadar upazila on Friday, health and family welfare minister Zahid Maleque said constant movements of people for trades and unrestricted travels by public transports are triggering a rise in coronavirus infection cases in the country.

The intensity of infections is much higher in Rajshahi, Rangpur, Chapainawabganj, Satkhira, Naogaon and Khulna districts, he said, adding that in some districts, the positivity rate has been reported as 30-40% while Noakhali and Rajbari are also on their way to follow the upward trend.