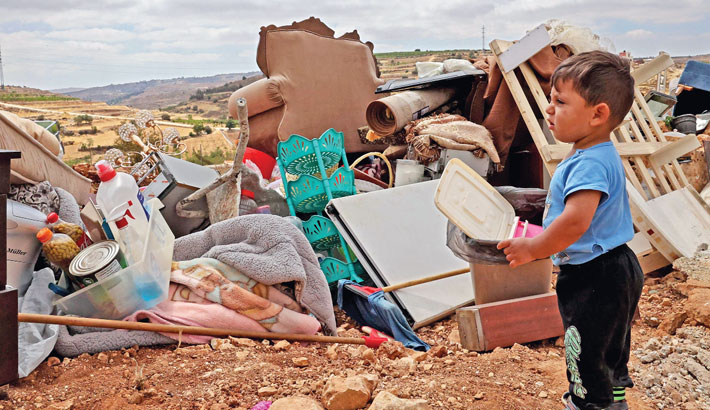 A child looks on as a Palestinian family checks their belongings after Israeli machinery demolished their house located within the “Area C” of the occupied West Bank, where Israel retains full control over planning and construction, near the village of Halhoul, north of Hebron, on Thursday. —AFP PHOTO

JERUSALEM: The Palestinian health ministry said on Thursday that a Palestinian teenager who was shot by Israeli troops in the West Bank a day earlier has died of his injuries, reports AP.

The Israeli military said Wednesday that a soldier stationed near a wildcat settler outpost near the West Bank city of Nablus saw a group of Palestinians approaching, and that one “hurled a suspicious object at him, which exploded adjacent to the soldier.” The army said that the soldier fired in the air, then shot the Palestinian who threw the object.

Earlier on Wednesday the Israeli military shot and killed a Palestinian woman whom it said tried to ram her car into a group of soldiers guarding a West Bank construction site.

In a statement, the army said soldiers fired at the woman in Hizmeh, just north of Jerusalem, after she exited the car and pulled out a knife.

The statement did not say how close the woman was to the soldiers, and the army did not release any photos or video of the incident.

In recent years, Israel has seen a series of shootings, stabbings and car ramming attacks against Israeli soldiers and civilians in the West Bank. Most have been carried out by Palestinians with no apparent links to organized militant groups.

Palestinians and Israeli human rights groups say the soldiers often use excessive force and could stop the assailants without killing them. In some cases, they say that innocent people have been identified as attackers and shot.

The Palestinians seek the West Bank, where the Palestinian Authority exerts limited self-rule, as part of a future state along with the Gaza Strip and east Jerusalem. Israel says Jerusalem is indivisible. Peace negotiations have stalled for many years.