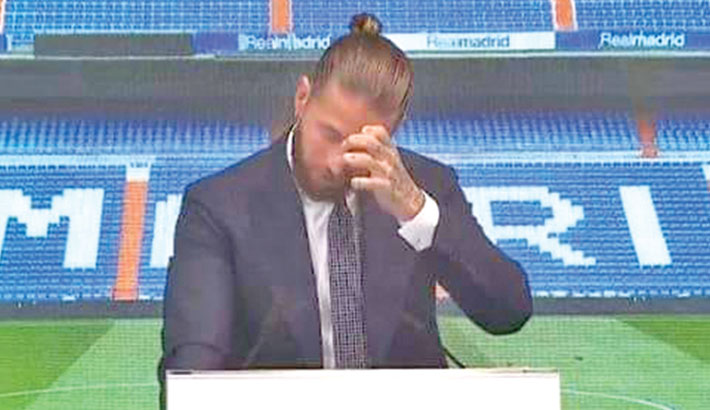 Sergio Ramos has claimed he is only leaving Real Madrid because the club withdrew their offer of a new contract, as the defender bid an emotional farewell on Thursday after 16 years.

Ramos said in a press conference he had pushed for a two-year contract extension and when he decided to accept one extra year, the club told his agent and brother "about a week ago" the offer had expired.

The 35-year-old, who will become a free agent on July 1, gave no indication as to where he will play next, although he ruled out joining Barcelona. He also said he was "not contemplating" a return to Sevilla.

Ramos joined Real Madrid from Sevilla for 27 million euros in 2005 and went on to become one of the club's greatest ever players, playing 671 games and winning 22 titles, including five in La Liga and four in the Champions League.

Despite making clear his disappointment over the failed negotiations with Real Madrid, Ramos refused to criticise president Florentino Perez directly, describing their relationship as like a "father and son".

Perez and Ramos delivered short speeches and shared a cordial embrace during a goodbye ceremony at Valdebebas, with Ramos' family among those in a small audience.

Ramos said bidding farwell was one of the "most difficult moments" of his life.

Ramos insisted he did not know why the offer expired and said he was "really surprised".

Injuries restricted Ramos to only 21 appearances for Real Madrid last season before Luis Enrique left him out of the Spain squad for Euro 2020.

Perez said it was "not an easy day", saluting Ramos as "one of the great legends of Real Madrid".