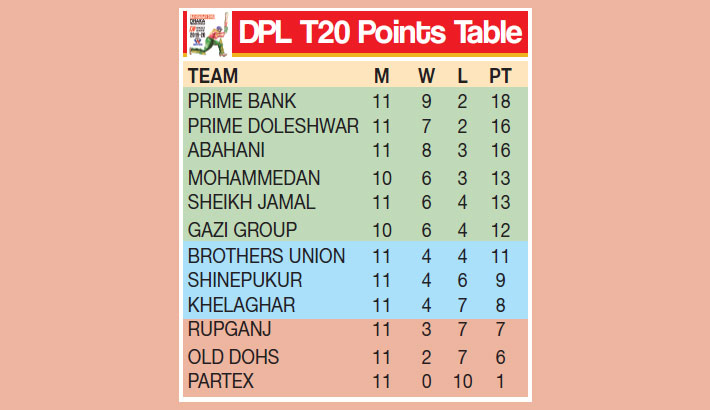 Brothers Union skipper Mizanur Rahman scored the first hundred in the ongoing Bangabandhu Dhaka Premier Division T20 League but it couldn’t help his team to reach Super League stage after their match against Sheikh Jamal Dhanmondi Club ended without any result due to rain at the BKSP-4 on Thursday.

Two more matches – Prime Doleshwar Sporting Club - Old DOHS and Shinepukur Cricket Club - Partex Sporting Club also received the same fate due to rain at the BKSP-3 and BKSP-4 respectively during the last round of the first phase of the tournament.

Prime Bank Cricket Club defeated Khelaghar Samaj Kallyan Samity by five wickets in D/L Method in a 10-over per side match to finish the first phase on top with 18 points in Dhaka while Abahani Limited beat Legends of Rupganj by the same margin at the same venue to finish two points behind of Prime Bank.

Meanwhile, Shakib Al Hasan returned to the field after serving a three-match ban during his team Mohammedan Sporting Club’s last match of the first phase of DPL against Gazi Group Cricketers in Dhaka.

At the BKSP-4, Mizanur struck 13 fours and three sixes for his unbeaten 65-ball 100 to become only ninth Bangladeshi batsmen to score a hundred in this format.

Brothers made 133-2 in 17 overs before rain stopped the game and the match couldn’t resume in due time and it forced Brothers to share points with Sheikh Jamal and end their journey in the ongoing DPL.

Rony Talukdar struck 39 off 18 balls as Prime Bank chased down their revised target of 74-5 in 9.1 overs to earn their ninth win in the league after restricting Khelaghar to 68-5 in 10 overs.