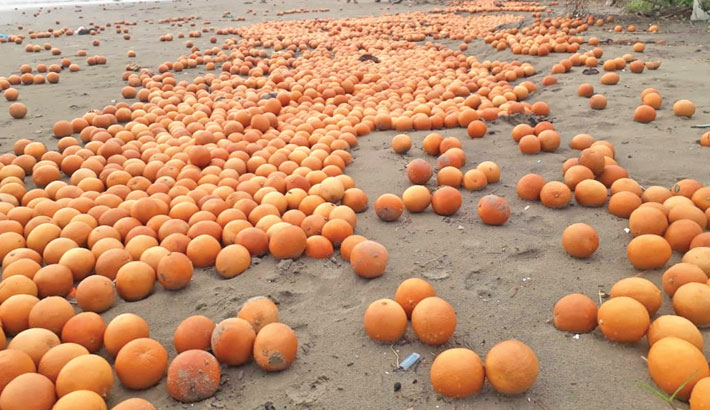 Huge rotten Malta fruits lying scattered on around half a kilometer area of Parki Sea Beach in Chattogram on Thursday, marring the pristine beauty of the top tourist attraction. —Rabin Chowdhury

Workers were engaged to bury the rotten fruits digging holes in the beach area.

Sources said unidentified people brought the Malta by two covered vans on the beach under Anwara upazila in the district on Monday night.

The mindless act had been causing nuisance to the natural lovers as the rotten fruits were spreading bad odour.

On the other hand, many curious people gathered on the beach, one of the top tourist attractions of the port city, to see the fruits lying on around half a kilometer area.

Children were also seen playing with the fruits while many were capturing pictures.

Quoting locals, Barashoto Union Parishad (UP) Chairman MA Kaiyum Shah said some unidentified people dumped the fruits on the beach three days ago. The fruits might have rotten at port yard or godown and the importer chose Parki for dumping them after failing to do so in the city area, he suspected.

“All the fruits will be buried by today,” he told on Thursday.

“We also informed the matter to police to identify the persons behind dumping the fruits,” he said.

Legal action will be taken against those who will be found responsible in this regard, added the UNO.