MP wearing placard on his neck raises the demand in Parliament 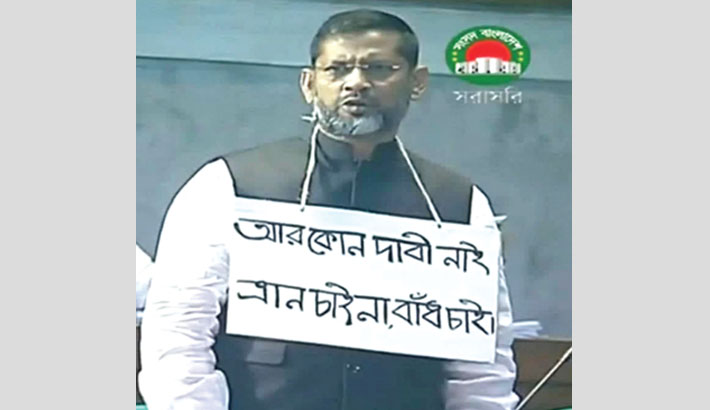 Wearing a placard on his neck, SM Shahzada of Patuakhali-3 constituency speaks in Parliament on Wednesday on the proposed budget for 2021-22 fiscal year. — Photo: TV grab

A ruling party lawmaker on Wednesday delivered his speech in the parliament with a placard down his neck inscribing a demand to construct permanent dams on coastal belts.

“There is no other demand, we do not need relief, we want dams,” reads the placard, hanged by SM Shahzada of Patuakhali-3 constituency.

Taking the floor, Shahzada told the House that like other lawmakers, he visited his constituency after the cyclone Yaas to provide food and relief among the cyclone-affected people.

“You have seen how many MPs in cyclone-prone areas have faced public outrage,” Shahzada told the House with Speaker Dr Shirin Sharmin Chaudhury in the chair.

“The people have told me that they do not want relief, they want dams. They have showed me this placard and I am wearing it in parliament now. Because I am one of them,” he said while speaking on the proposed national budget for 2021-2022.

The lawmaker demanded construction of permanent embankment at Dashmina and Galachipa to protect residents of his area from natural disasters like cyclones and flooding.