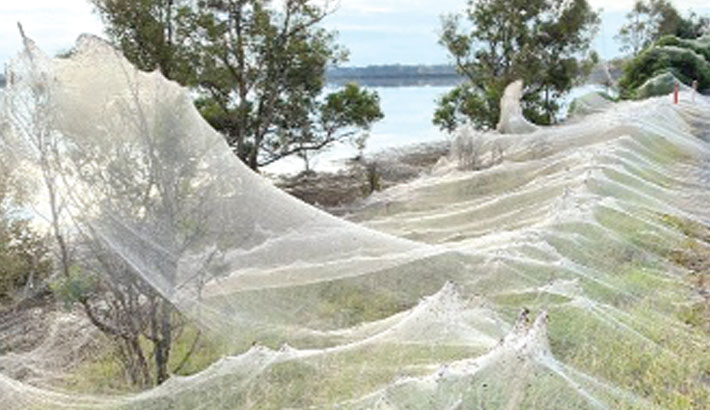 Massive spider webs stretching across trees and paddocks have formed near towns in Australia recently hit by floods, reports BBC.

In one area, a spider web covered more than a kilometre along a road.

Experts say the veils are created by a survival tactic known as “ballooning”, where spiders throw out silk to climb to higher ground. Dr Ken Walker, a senior insects curator from Museums Victoria, said it was likely that millions of spiders had thrown strands up to the surrounding trees. “Ground-dwelling spiders need to get off the ground very quickly. The silk snakes up and catches onto vegetation and they can escape,” he told The Age newspaper.

This had created large, “gossamer” sheets covering wetlands between the towns of Sale and Longford.

One local councillor, Carolyn Crossley, said she had gone down to a lake embankment on Monday evening to check for flood damage, and was struck by the natural phenomenon. Ms Crossley said she had seen the effect before, but not at such a large scale.