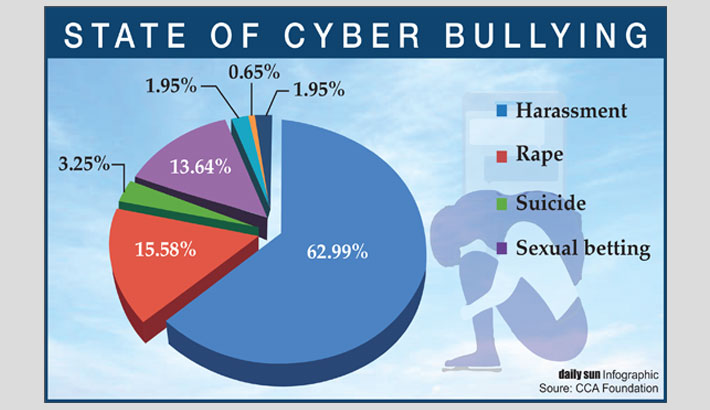 Social media has turned into a tool for committing various crimes as the communication apps, especially facebook-run platforms, are being used for character assassinations, sexual harassment as well as extortion.

High officials at the government’s computer response team have mentioned that the crimes on cyberspace have been increasing due to the expansion of technology. However, the cyberspace situation has also improved in the last five years, they said.

Technology experts have suggested connecting the familiar ones rather than unknown persons on social media.

However, the real scenario has been found different in a recent research by Ain O Salish Kendra.

The rights group has found that around 36 percent girls face cyber bulling from friends and 27 percent becomes victim virtually from adult persons or relatives in family.

In most recently, an incident of Rangpur came into light from a newspaper that a criminal, Ariful Islam, raped a woman after threatening to spread her videos on social media which took from spy mode.

According to the latest research of the Cyber Crime Awareness (CCA) Foundation, around 92.2 percent victims of sexual bulling on internment platform are women while 56.49 percent represents the age group from 18 to 30 years. In most cases (51.91 percent), the abusers use video to violate someone.

The government computer response team chief and digital security agency director, Tarique M Barkatullah, has mentioned that the cyberspace in Bangladesh is ‘comparably safer’ in the region as the country has improved in global index.

“The main problem is social awareness. In most cases, victims fall in trap on social media. We are working on guidelines on norms and behaviors on social media. After completing the regulation, the situation will improve gradually,” he told the Daily Sun.

In most cases, the victims experienced sexual harassment (62.99 percent) while 15.58 percent victims were raped by the abusers, revealed the CCA report.

Regarding the recent trend of cyber crimes, CCA Foundation President Kazi Mustafiz said the government has to run mass awareness to share knowledge on technology use to improve the situation.

Of total victims, 2.25 percent committed suicides and 1.95 percent faced attempted to murder, according to the research.

In terms of geographical locations, most of the cyber crimes happened in Dhaka (33.2 percent) following Chattogram (16.88 percent).

Talking to the Daily Sun, Arif has mentioned that Facebook and YouTube have different artificial intelligence-based algorithm to detect violence or pornography in video.

“It’s hard to disseminate the malicious content through these platforms. Sometimes, in mess of billions of videos, the algorithm misses the content considering the geographical location. In this case, the best way is to report about the content on Facebook immediately. And social awareness is ultimate solutions,” he said.

There are around 115.4 million internet connections in Bangladesh while 41 million users signed up with Facebook from the country, according to official data.