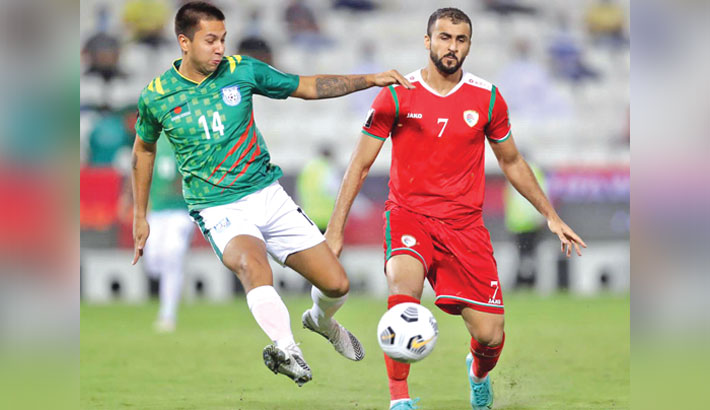 Bangladesh received a surprise direct entry in the third round of Asian Cup qualifiers on Wednesday despite losing to Oman 0-3 in their last Group E match of the joint qualifiers round two for FIFA World Cup 2022 and AFC Asian Cup 2023 on Tuesday.

Asian Football Confederation on Wednesday unveiled the line-up for Asian Cup qualifiers and confirmed the 22 out of 24 teams for the qualifiers.

After ending joint qualifiers round two, the top 13 Asian teams, including Asian Cup hosts China and FIFA World Cup hosts Qatar, qualified for the main round of Asian Cup and World Cup qualifiers next round.

A total of 22 teams -- including three of the lowest-ranked second-placed teams, third and fourth-placed teams from eight groups of joint qualifiers and three best fifth-place teams -- have qualified for the 24-team third or final round of Asian Cup qualifiers.

Bangladesh, who earned two points from eight matches, qualified as one of the three best fifth-place teams.

Teams that have been ranked 14 to 35 in the recently concluded joint qualifiers will play in the third round of qualifiers and the rest of the four teams, which ranked 36 to 39, will play the two-leg qualifiers play-offs on September 7 and October 12.

“It is a great chance for Bangladesh. The point against Afghanistan was so important, it created an opportunity for us to qualify directly here,” head coach Jamie Day told the reporters on Wednesday.

Bangladesh Football Federation General Secretary Abu Nayeem Shohag said that they will take all possible preparations to give their best in the qualifiers.

“It is really great for Bangladesh. Our president Kazi Salahuddin instructed us to take all possible preparations for the competition so that the team can give their best there,” said Shohag.

Meanwhile, the national team will return to Dhaka on Friday and they will complete a three-day quarantine upon their arrival from Doha.

The booters held Afghanistan 1-1 before losing to India and Oman by 0-2 and 0-3 respectively in the last two matches in their Qatar tour.