SSF to be modernised further: PM 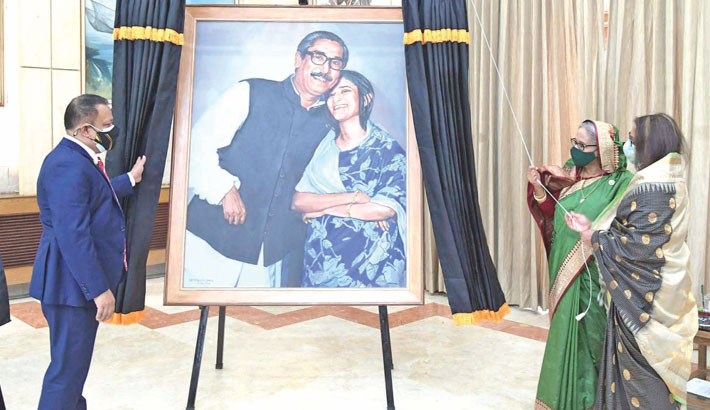 Prime Minister Sheikh Hasina along with her daughter Saima Wazed Putul unveils a portrait of her joyful moment with Father of the Nation Bangabandhu Sheikh Mujibur Rahman gifted by Director General of Special Security Force (SSF) Maj Gen Md Majibur Rahman at her official Ganabhaban residence in the capital on Tuesday, marking the 35th founding anniversary of the special force. —PID photo

Prime Minister Sheikh Hasina on Tuesday said that her government has been developing the Special Security Force (SSF) as a time-befitting force equipped with advanced technology and appropriate training so that it could keep pace with the modern era and the constantly changing trends of crimes with the advent of newer technologies which create both luxury and risk to life.

“This is the reality that science and technology create both the opportunities and risks for us. We can lead a modern life using those while the terrorists and militants are using those to give crimes newer dimensions. So, we’re always trying to develop the special force as a well-trained and efficient one so it can keep pace with the modern trend,” she said.

She was addressing virtually a function of the SSF, held at the Prime Minister’s Office (PMO), from her official Ganabhaban residence in the capital marking its 35th founding anniversary, reports BSS.

The 35th founding anniversary of the force is being observed in a befitting manner today, as the Presidential Security Force (PSF) which was later renamed SSF was raised on 15 June 1986.

Mentioning that it was always tough to ensure protection for the VIPs as the geo-politics in the sub-continent or in the world is always changing alongside the trend of crimes, the Prime Minister said that her government has been arranging overseas trainings for the SSF personnel so they could be familiar with the constantly changing technologies and the way they (foreign countries) train their security personnel.

The Prime Minister greeted the SSF personnel for their contribution in making success the twin mega celebrations marking the golden jubilee of Bangladesh’s independence and the 101 birth anniversary of the Father of the Nation from March 17 to 26 by ensuring security maintaining the due health protocol amid the coronavirus pandemic.

“Maintaining the health protocol amid the coronavirus pandemic one the one hand, and on the other hand, giving security to the guests (heads of state or government from abroad) and their entourages and conducting the programmes was a tough job. You did the job successfully with utmost efficiency. So, I extend my heartfelt greetings to you all.”

The Prime Minister said that she found the SSF personnel efficient in performing their duties since she assumed office after 21 years, adding that all (foreigners) for whom they arranged physical protections praised the force for their dedication and efficiency.

She asserted her continued support in future for modernisation of the force that is entrusted with providing physical protection to the President and Prime Minister of Bangladesh and other VIPs (Very Important Persons) designated by the government.

The Prime Minister said that her government has been formulating economic policies and work-plans keeping in mind that Bangladesh is an independent country and it would be a developed and prosperous country in the world as envisioned by Father of the Nation Bangabandhu Sheikh Mujibur Rahman.   She said that Bangabandhu wanted to develop Bangladesh in a beautiful manner where every person would get food, clothe, accommodation, education and treatment and for this purpose he started working immediately after the independence.

But, the killers did not give him the time to materialize his dream as Bangabandhu along with most of his family members were brutally assassinated on August 15 in 1975, she said, adding that she has been working tirelessly to make his (Bangabandhu’s) dream true by making Bangladesh a poverty-and hunger-free country.

In the function, the Prime Minister opened an e-book titled “Mujib-Bangalee-Bangladesh” which was edited by the SSF Director General Maj Gen Md Majibur Rahman.

The SSF DG also handed over a cheque of Tk two crore to the Prime Minister as the donation from the force to construct 100 houses for homeless families.