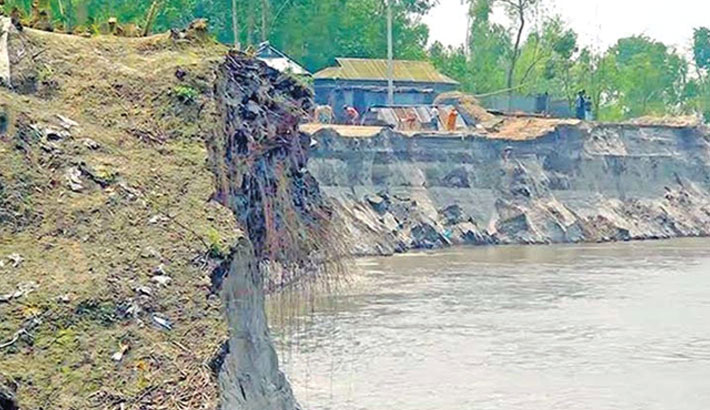 LALMONIRHAT: It’s an ordeal people living on the banks of the Teesta and Dharla rivers in the district go through almost every monsoon—severe erosion of riverbanks. But this year, pre-monsoon showers have caused widespread damage.

Since last week, several buildings—residential and educational—in many areas of the district have been swallowed up by the mighty rivers, rendering hundreds homeless. Water levels in the Teesta and Dharla have gone up because of incessant showers over the past four-five days.

Erosion of riverbanks due to the swelling Teesta river has damaged crops and farmlands in the union too.

The situation has caused severe discontent among the affected residents against the local authorities. Many have urged the authorities to build an embankment instead of disbursing the “usual government relief”.

Mohammad Ali, a 60-year-old resident of Balapara village, told the agency, “The Teesta has devoured my ancestral house and farmland. I am a penniless man now.”

Similarly, Zahurul Haque, a resident of Folmari village in Sadar upazila, said, “My house was swallowed up by the Dharala river in front of my eyes. We are homeless.”

Habibur Rahman, the chairman of Mogolhat union in Sadar upazila, said, “This year, river erosion wreaked havoc before monsoon, and it may take a serious turn in the rainy season. Already, many people have been evacuated to safer places.”

However, Abul Hossain, now a homeless resident, said, “We do not want any relief materials. It’s high time that the local administration placed sandbags along the banks to prevent any further erosion during the monsoon season.”

Mohammad Mansur Uddin, Upazila Nirbahi Officer of Aditmari, said, “A large portion of the embankment has been washed away. We need to immediately protect the embankment. Authorities concerned have been informed.”

When contacted, Chief Engineer of Lalmonirhat Water Development Board, Mohammad Mizanur Rahman, said, “We have already sought funds for repairing the embankment but are yet to get any response from the higher authorities.”

“Meanwhile, some sandbags have been placed along the banks in the erosion-prone areas,” he added.

Lalmonirhat deputy commissioner Mohammad Abu Zafar said that the Upazila Nirbahi Officer has already visited the spot. “Relief materials will soon be disbursed among the affected people,” he added.