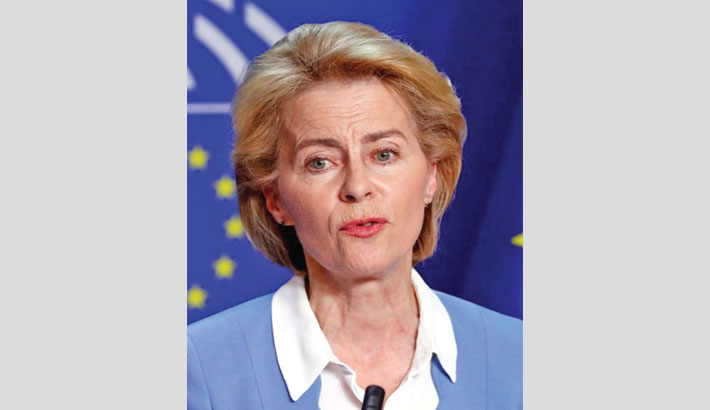 BRUSSELS: The European Union’s top official urged both sides to think about their long-term relationship and put an end to the bloc’s spat with the UK over post-Brexit trade arrangements, reports AP.

Lengthy negotiations over Britain’s divorce from the EU have already been complicated, and the practical separation between the former partners proves to be a thorny issue, too.

In their latest feud, the EU is angry over the British government’s delay in implementing new checks on some goods coming into Northern Ireland from the rest of the UK, as was agreed upon in the Brexit deal. On the other hand, Britain says those checks are imposing a big burden on UK businesses and destabilizing Northern Ireland’s peace.

“I’ve always said I want a new beginning with old friends,” European Commission President Ursula von der Leyen said on Tuesday. “We see that at the beginning now there are difficulties, and there are serious issues that have to be solved. I’m deeply convinced, with a constructive approach, and with the notion that we know it’s a long-term relationship we are building here, this issues just can be overcome.”

At the heart of their dispute lies the Northern Ireland protocol, a Brexit mechanism that created a trade border in the Irish Sea to avoid creating a hard border between Northern Ireland and EU member Ireland. An open Irish border helped underpin the peace process that ended decades of sectarian violence in Northern Ireland.

“We know that the withdrawal agreement and the protocol are the best we could have gotten in a complicated situation,” Von der Leyen said. “Now it’s our duty on both sides to make sure that it works and and to implement it.”

The bloc is threatening legal action if the UK does not fully bring in the checks, which include a ban on chilled meats from England, Scotland and Wales going to Northern Ireland beginning next month.

The post-Brexit dispute has raised political tensions in Northern Ireland, where some people identify as British and some as Irish. US President Joe Biden has even been drawn into the spat, raising concerns about the potential threat to Northern Ireland’s peace accord.

Relations between the EU and the UK have been strained since a Brexit transition period ended on Jan. 1. The two sides have also argued so far this year over issues ranging from COVID-19 vaccine supplies to the full diplomatic recognition of the EU in Britain.