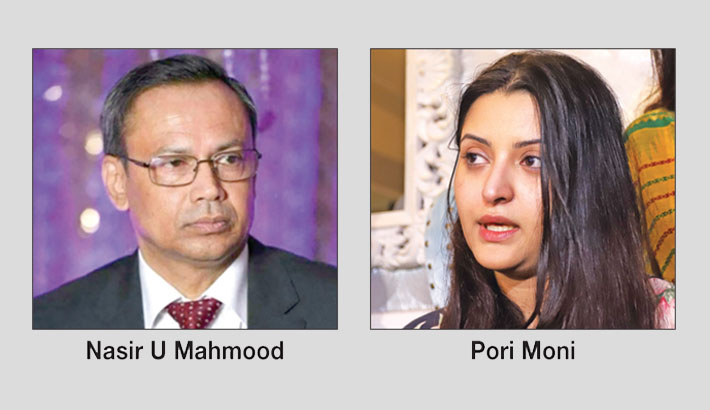 Detectives have arrested businessman Nasir U Mahmood, the prime accused, and four other people in case filed by popular film actress Shamsunnahar Smrity, popularly known as Pori Moni, for attempting to rape and murder her.

A team of Detective Branch (DB) of Dhaka Metropolitan Police (DMP) raided a house at Road No. 12 of Uttara Sector-1 in the capital and arrested them around 3:30pm on Monday.

Nasir, 65, is the chairman of Kunjo Developers Ltd, a presidium member of Jatiya Party (JP), former president of Uttara Club and a member (Entertainment and Culture) of Dhaka Boat Club. The other arrestees are Tuhin Siddique Ami, 33, Lipi Akhter, 18, Sumi Akhter, 19, and Nazma Amin Snigdha, 24.

The cops also seized some bottles of homemade and foreign beer and 1,000 Yaba pills from the house, police said.

Mashiur Rahman, DMP deputy commissioner (Gulshan Detective Division), told the Daily Sun that Savar police requested the DB under DMP to help them arrest accused Nasir and others after a case filed over the incident that took place at Dhaka Boat Club.

Then the DB police tried to know about the whereabouts of the accused and came to know that they were staying at a house in Uttara, he said.

Later, a team of police, led by Joint Commissioner (DB) of the DMP Harun-Or-Rashid, raided the house and arrested them.

Of the arrestees, Nasir and Ami are accused in the attempted rape and murder case filed with Savar Model Police Station by Pori Moni while the rest three girls were appointed by Nasir for his entertainment on the basis of monthly salary, Mashiur said.

A case will be filed against the arrestees under the Narcotics Control Act, he said.

Meanwhile, Nasir U Mahmood told reporters that the allegation brought against him by Pori Moni was false and fabricated.

Pori Moni and some others entered the club in an inebriated state and tried to take expensive alcohol bottles from the bar of the club, he claimed, adding that when he opposed the matter, an altercation ensued among them. “For this, she filed a false case against me.”

Meanwhile, the film and drama actors and actresses, directors and producers raised their voices on social media, demanding exemplary punishment of Nasir and others involved in the hatred attempt to rape and murder Pori Moni.

“My mind was filled with wounds and hatred after hearing the incident of Pori Moni. It hurts me as a human being, girl and member of acting world,” film actress Joya Ahsan said in a Facebook post.

Ashna Habib Bhabna wrote: “As a woman, it’s painful for me to feel the cry of Pori Moni. An ant has respect for others. Pori Moni is a heroine, heroine of Bangla cinema. Can whatever anybody wants be done with her?”

She also demanded that punishment be meted out to the accused.

Earlier on Monday morning, Pori Moni filed the case with Savar Model Police Station accusing Nasir, Ami and four unnamed people of attempting to rape and murder her at Dhaka Boat Club at Birulia in Savar in the early hours of June 9, said Qazi Mainul Islam, an inspector of the police station.

On Sunday night, the actress alleged in a press conference that Nasir, Ami and four others attempted to rape her in the club. Before holding the press briefing, she sought intervention of Prime Minister Sheikh Hasina to ensure punishment of the accused.

According to the case statement, Pori Moni, her younger sister Boni, 20, makeup person Jemi and accused Ami in two cars left her (Pori Moni’s) residence at Banani around 11:30pm on June 8 for going to Uttara.

On the way, Ami, who is a friend of Pori Moni, told her that he had a piece of business of just two minutes at Dhaka Boat Club.

As per his request, the cars were stopped in front of the club around 12:30am on June 9. After getting down from the vehicle, Ami phoned someone and then security guards opened the gate of the club.

Before entering the club, Ami requested Pori Moni to get down from the car and enter the club as its environment is charming.

Movements later, Boni felt the call of nature. So, they (Pori Moni, Boni and Jemi) entered the club and Boni used the toilet adjacent to the bar of the club.

When they were in the club, Nasir requested them to go inside the bar and take drinks, but they refused his request.

At one point, Nasir tried to forcibly feed Pori Moni with wine. As she tried to prevent him, he poured wine from a bottle into her mouth, touched sensational parts of her body and hurled abuses at her.

Nasir tried to rape her but failed. Then he broke an alcohol bottle and glass into pieces and hurled those at Pori Moni. He assaulted Jemi as she tried to save the actress. They managed to escape the club around 3:00am.

Meanwhile, the Dhaka Boat Club authorities have suspended the membership of Nasir, Ami and another person Shaha S Alam over the incident.

They also formed a probe panel to look into the matter, saying further action will be taken after getting the investigation report.