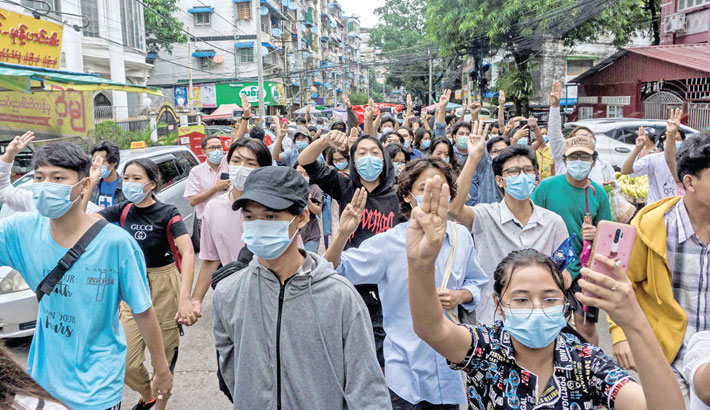 Protesters make the three-finger salute as they take part in a flash mob demonstration against the military coup in Yangon on Monday. – AFP PHOTO

Near daily protests have rocked Myanmar since the generals’ February 1 putsch.

A mass uprising has been met with a brutal military crackdown that has killed more than 850 civilians, according to a local monitoring group.

The junta has brought an eclectic raft of charges against the Nobel laureate, including claims she accepted illegal payments of gold and violated a colonial-era secrecy law.

Another police major testified on separate charges accusing her of illegally importing and possessing walkie-talkies, she added.

Suu Kyi “paid keen attention” throughout the hearing, another member of her legal team, Khin Maung Zaw said in a statement.

Journalists were barred from proceedings in the special court in the capital Naypyidaw, but an AFP reporter said there was a heavy police presence outside.

Suu Kyi’s lawyers—who have struggled to gain access to their client—have said they expect the trial to wrap up by July 26.

“And she seems quite determined to assert her rights, whatever the results.”

A separate trial is scheduled to start on Tuesday over sedition charges she faces alongside ousted president Win Myint and another senior member of the NLD.

If convicted of all charges, Suu Kyi, 75, faces more than a decade in jail.

“It is a show trial motivated only by political reasons,” Debbie Stothard, Coordinator of the Alternative ASEAN Network on Burma, told AFP.

“Min Aung Hlaing is determined to lock up Aung San Suu Kyi for the rest of her life. If he could, he would probably charge her under every law available.”

Suu Kyi spent more than 15 years under house arrest during the previous junta’s rule before her 2010 release.

But the coup has returned Suu Kyi to the role of cloistered democracy icon.

On Thursday, she was hit with additional corruption charges over claims she illegally accepted $600,000 in cash and around 11 kilos of gold.

“There is an undeniable political background to keep her out of the scene of the country and to smear her prestige,” he told AFP last week.

“That’s one of the reasons to charge her—to keep her out of the scene.”

The junta has previously said it would hold fresh elections within two years, but has also threatened to dissolve the NLD.

It has also responded with force to a growing mass movement against its rule—shooting protesters, targeting journalists and shutting down news outlets.

Monday saw the release of an American journalist detained since March after charges against him were dropped, his lawyer told AFP.

Nathan Maung, who founded the local Kamayut Media outlet, has been detained under a colonial-era law that criminalises encouraging dissent against the military.