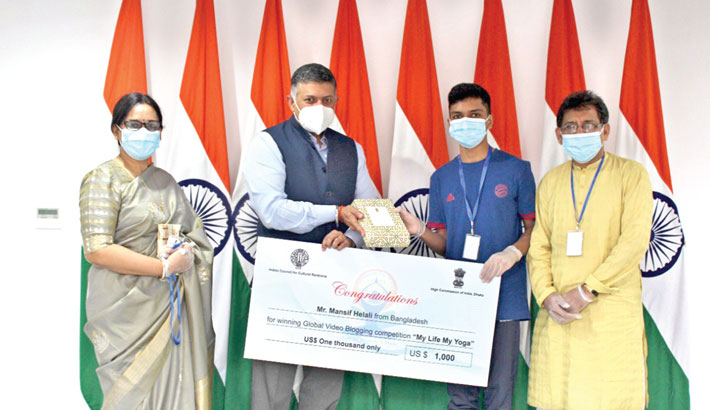 Mansif Helali, a teenager from Bangladesh who finished third in the youth category of the Global Video Blogging Competition, receives a dummy cheque for US $1000 from Indian High Commissioner Vikram K Doraiswami at the High Commission of India in Dhaka on Sunday. SUN photo

The ICCR launched the competition with the theme “My Life My Yoga” in June 2020.

Despite the ongoing Covid-19 pandemic, the competition elicited an overwhelming response from across the globe, presumably in part because of enhanced interest in Yoga as a means of maintaining health in the fight against Covid-19.

As a result, a very large number of participants uploaded videos for this global event from around the world. As statistics showed, the maximum number of entries was from Bangladesh, said the High Commission of India, Dhaka on Sunday.

And so it is a pleasure to report that Mansif Helali, a teenager from Bangladesh, bagged the third position in the youth category for his extraordinary skills in different postures of yoga. He received a prize including US $1000.

High Commissioner Vikram K Doraiswami handed over the cheque to Mansif Helali at an event at the High Commission of India in Dhaka. He congratulated Helali on his achievement and wished him success in days to come.

Helali has been a student of Yoga for the last 11 years. This well-spoken and thoughtful young man wants to contribute to public health and social harmony through holistic healing as a lifelong passion.

Family members of Helali and senior officials of the High Commission were present during the handover ceremony.