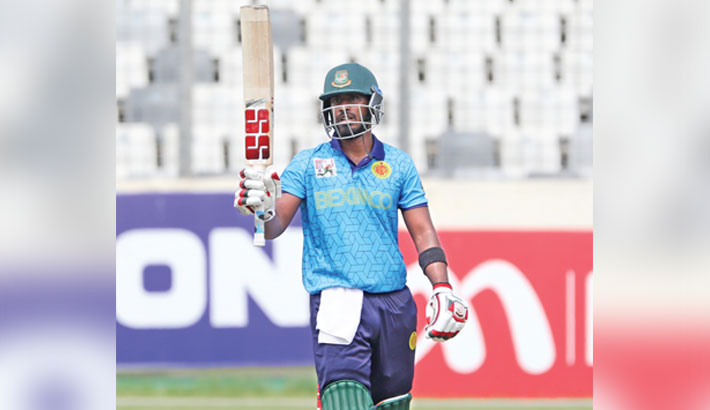 Abahani Limited opener Munim Shahriar celebrates after scoring a half-century against Prime Bank Cricket Club during a DPL match at the Sher-e-Bangla National Stadium in the capital on Sunday. —WALTON PHOTO

In the other matches, Brothers Union, Sheikh Jamal Dhanmondi Club and Prime Doleshwar Sporting Club won their respective eighth round matches against their respective opponents on the same day.

Abahani opener Shahriar struck nine fours and five sixes in his 50-ball innings as they made 183-3 in their stipulated overs before restricting Prime Bank to 143-6 after the latter were given a revised target of 174 runs in 19 overs.

Prime Bank opener Tamim Iqbal made the highest 55 runs for them.

Old DOHS fell nine runs short of the target as they made 115-4 in 16 overs after being given a revised target of 125 runs in a rain-affected match. Mohammedan earlier scored 159-5 in their stipulated 20 overs.

Brothers Union earned a narrow one-run win in D/L Method over Shinepukur after they reached 132-4 in 18 overs replying to Shinepukur’s 150-3 in 20 overs at the BKSP-3.

Skipper Nurul Hasan made 44 not out while Shykat Ali scored 43 runs as Sheikh Jamal beat Rupganj by seven runs at the BKSP-3. Rupganj made 137-6 before Sheikh Jamal reached 127-4 in 18 overs to win the match in D/L Method.

Prime Doleshwar earned their fifth win in the ongoing meet to climb to third place in the points table after beating Partex by five wickets in Dhaka.

Prime Doleshwar reached 136-5 in 19.2 overs after restricting Partex to 134-7 in their stipulated overs to hand them their eighth straight defeat in the meet.