50 more fish sanctuaries being set up in Rajshahi 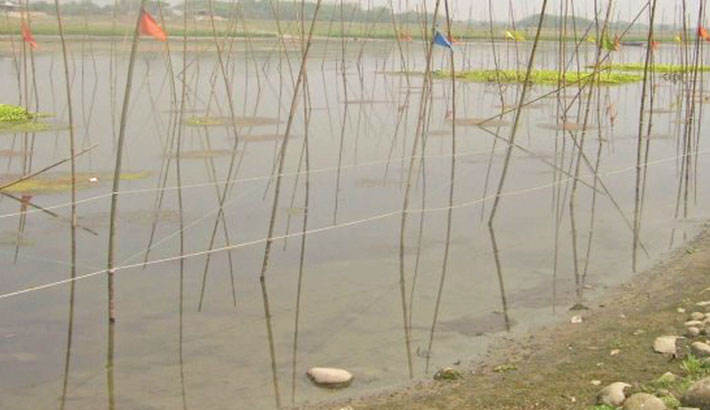 RAJSHAHI: Around 50 more fish sanctuaries are going to be established in the division aimed at boosting the stock of endangered indigenous fish species besides protecting the fish biodiversity through creating awareness among the people.

Apart from this, 150 existing fish sanctuaries will be renovated in the division for ensuring a sustainable water ecosystem coupled with developing fish habitat for improving productivity, reports BSS.

The developments will be done with intervention of a four-year project titled “Fisheries Development Project in Rajshahi Division” until December 2022, said Kamrul Hassan, Director of the project.

The four-year project is being implemented in 65 upazilas in all eight districts of the division involving around Taka 47.47-crore since January 2019 to boost fish production along with enhancing its productivity and habitat development.

Being implemented by the Department of Fisheries (DoF), the project is intended to boost production of fish along with enhancing its productivity and habitat development through establishing 1,860 demonstration farms and 80 beel nurseries after re-excavation.

Kamrul Hassan said generating more scopes of improving living and livelihood conditions and poverty reduction of the marginalised people, employment generation for the youths and transferring modern technologies among the fishermen are the ultimate goals of the project.

Around 2,000 distressed fishermen will be engaged in various alternative income generation activities in phases for reducing over fishing in the natural water bodies.

Training, seminar and workshop are being arranged for the beneficiary farmers and the current promotional activities are being progressed through social distancing and other safety precautions amid the corona pandemic.

A total of 240 Kuchia demonstration farms will be established for making the ethnic minority people self-reliant through boosting its production.

The project includes 180 cage and pen fish farming demonstrations for the best uses of the open water bodies through promoting cage fish culture coupled with capacity development of the people living alongside the river banks.

As a result of establishing new sanctuaries and renovation of the existing ones, production of the native fish species will be enhanced side by side with revitalising the endangered ones, sources said.

Requisite number of beel nurseries will be established for boosting fish production to meet the gradually mounting protein demands.

Fish production will be enhanced to five to six tonnes per hectare through infrastructure development in natural water bodies together with transferring of modern technologies among the farmers.

In phases, 62,000 beneficiary fishermen will be imparted training on modern fish farming technologies aimed at building their capacities.

He also said the project is intended to protecting the endangered fish species through installation of fish sanctuaries and habitats.