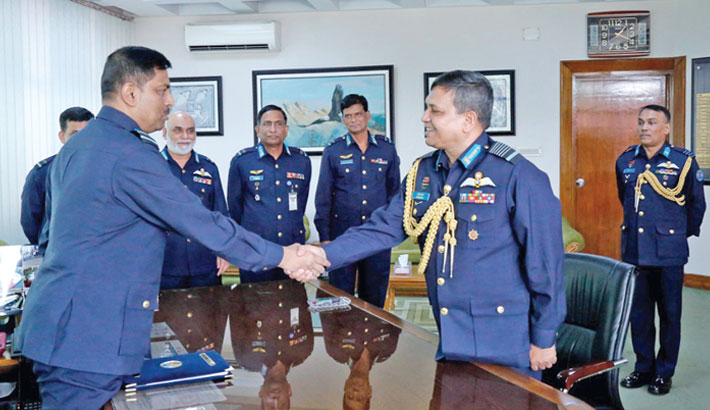 Principal Staff Officers along with other senior officers of Air Headquarters were present in the function.

Earlier in the morning, Masihuzzaman Serniabat visited Father of the Nation Bangabandhu Sheikh Mujibur Rahman Memorial Museum and paid homage to the great leader by placing a wreath at his portrait in front of the museum.

After laying the wreath, he stood in solemn silence for a while in front of the portrait as a part of the respect for Bangabandhu and later signed the visitors’ book.

Besides, the outgoing chief of air staff paid homage to the members of Armed Forces who were martyred during the war of liberation in 1971 by laying floral wreaths at Shikha Anirban. After this, he also signed the visitors’ book.

Before departing Air Headquarters, Masihuzzaman Serniabat was presented a guard of honour by a smartly turned out BAF Contingent.

He inspected the guard of honour and took salute. He also planted a sapling on Air Headquarters premises on the occasion. Finally, the outgoing air chief left Air Headquarters and his colleagues said goodbye to him.