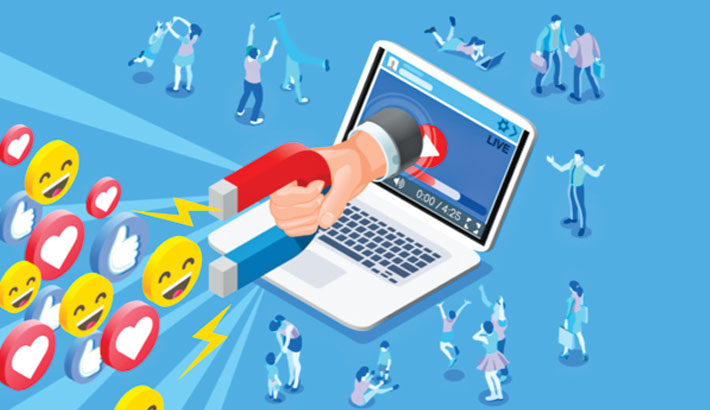 Bangladesh's legal system does not adequately address online sexual harassment and pedophilia. Such as, in the Digital Security Act, 2018, there is no legislative provision against pedophilia. The Pornography Control Act, 2012, addresses child pornography. There is, however, no provision for circumstances in which both the perpetrators and the victims are young boys and young girls. So, it is important that the law in this regard is made clear.

Basically, children, adolescents and young people use these apps. According to a statistic from "Oberlo.com", 41 per cent of TikTok users are between the ages of 18 and 24. Both TikTok and Likee are popular in Bangladesh as it requires less internet data to run or upload videos to these two apps. So, their users are spread all over the country in the district towns and villages.

The youth are now addicted to TikTok, Likee, Bigo-Live videos. Misuse of the internet is destroying morality, social values and mutual respect in society. Young people and teenagers are becoming violent, getting involved in gangs and taking part in criminal activities. Young people seeking cheap popularity through these apps start to think of themselves as social entertainment stars.

In the Bigo-Live application, a group of antisocial people or gangs reveal unusual obscene gestures or pornographic videos to the common people. Some are aimed at cheating the common people and making a lot of money using mobile banking. The social media networks are being used unethically hindering the progress of the youth in Bangladesh society.

The law of Bangladesh has improved much in order to deter pornography and immorality on the internet. We should be aware of what the law says about such internet misdeeds and the punishments for them under the law to reduce the tendency of such crimes.

Subsections three and four of "Section six" of the Bangladesh Pornography Control Act, 2012, state that:

(3) Any person who provides pornography through the Internet or website or mobile phone or any other electronic device shall be deemed to have committed a crime and shall be liable to a maximum five years of rigorous imprisonment and fined up to 200,000 (two lakh) taka for such offense.

(4) A person who causes a public nuisance by displaying pornography shall be deemed to have committed a crime and shall be liable to a maximum of two years rigorous imprisonment and a fine not exceeding 1,00,000 (one lakh) taka for such offense.

So, we can say that if pornography or pornographic videos are shown on such social entertainment mediums prevalent in Bangladesh, the culprits will be punished according to the above-mentioned law.

Through TikTok, many people are making videos by dyeing their hair in bizarre colors, following alien cultures, uploading violent and obscene content on the internet. These videos are sending wrong messages to the young generation. India, Pakistan, and Indonesia have already banned all embarrassing and immoral contents on internet to discourage pornography.

As disclosed by the deputy commissioner of police, some recent issues of videos on "TikTok" led to trafficking of women.

Saima (not real name), aged 15, led a regular teenage life of the young generation, making videos on the popular mobile app TikTok before she was trafficked to India with the promise of a better job. She was one of the victims of TikTokRidoy, who lured her and four other girls through the Satkhira border to Bengaluru, South India, promising them well-paid jobs.

The gang used to smuggle young women with the bait of giving them modeling jobs or tempting jobs abroad. Few young women were even taken to India and sold as sex workers.

Trafficking in women is a heinous crime. From the above incident, the young girls fall prey to "women traffickers" on social entertainment media. The court will punish the culprits according to the law.

What about the punishment for the crime of trafficking?

According to 1 of 5 of the Prevention of Violence against Women and Children Act, 2000:

1) If a person traffics, sends, buys or sells a woman abroad for the purpose of prostitution or illegal or unethical activities; or

2) If a person hires or transfers a woman for any other purpose; or

3) If anyone holds a woman in his possession, occupies, or in custody for any similar purpose;

Then he/they is/are liable to “death penalty” or to be sentenced to imprisonment for “life imprisonment” or “not more than twenty years but not less than ten years” and also punished with additional fines.

Misuse of social entertainment mediums is destroying our young society, linking it to crime, and targeting the passion of young society to gain cheap popularity. If these issues are not controlled in Bangladesh now, they may take more terrible forms later. The young generation spending overtime on these social entertainment mediums are pushing them away from the family, studies, regular physical exercise and positive activities. Every family should beware of what their child is doing. Families should make young people aware and treat them in a friendly manner to protect them from social media harms.

The misuse of social networks is destroying the tradition, heritage, art and culture of our people. Article 23 of the Constitution of the People's Republic of Bangladesh states that "the State shall take measures to preserve the cultural heritage and heritage of the people and to nurture and develop the national language, literature and arts so that people of all walks of life may have the opportunity to contribute to the richness of the national culture."

In my opinion, to preserve the cultural heritage of the people of this country, the use of social entertainment media such as "TikTok", "Like", "Bigo Live" requires special vigilance and specific policies. In our country, laws should be enacted to stop the misuse of these social entertainment mediums to protect the youth. Thereby the ideology of the Father of the Nation Bangabandhu Sheikh Mujibur Rahman will be entrenched, securing our cultural and traditional norms and the future of our young people of Bangladesh.