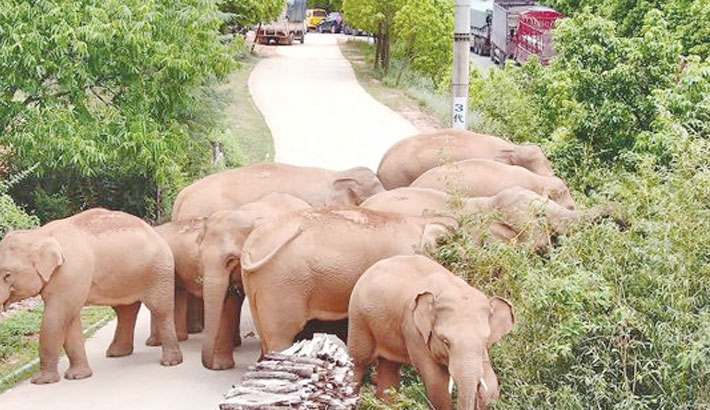 BEIJING: Fifteen elephants on a 500-kilometre march of chaos across southwestern China have seen one member break away from the herd, as officials battle to contain the animals and stop them causing further damage.

A solo elephant has fallen 12 kilometres behind his friends over the last four days as China keeps watch over the animals and their epic trek through homes, barns and crops in Yunnan province, reports AFP. Chinese state television has launched a 24-hour live feed of the herd while hundreds of people and dozens of drones have been deployed to track their journey and evacuate locals in their path.

Their migration has captivated Chinese social media while costing local farmers more than a million dollars in losses.

The herd moved into the outskirts of provincial capital Kunming last week, prompting authorities and volunteers to line up trucks in an effort to keep them away from densely populated areas.

Earlier footage showed the group bathing themselves in mud and napping together in a clearing.

Experts are unsure where the elephants are headed or why they left their home at the Xishuangbanna National Nature Reserve late last year.

The wild elephant population in Yunnan stands at around 300, up from 193 in the 1980s, official news agency Xinhua reported.

Elephants have increasingly wandered into villages and harmed crops in recent years, according to local officials.