CCDM to take action after getting umpire’s report 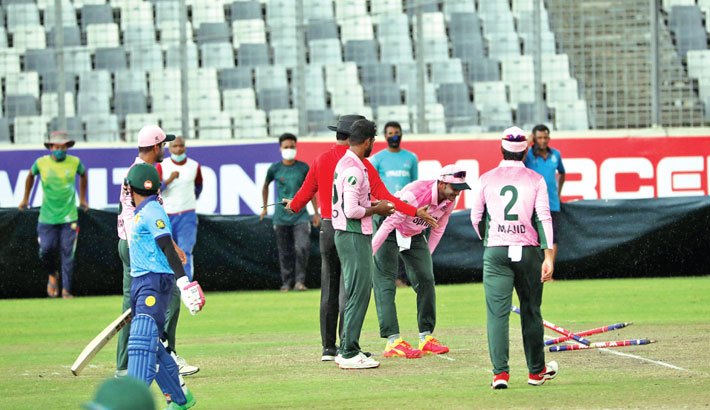 All-rounder Shakib Al Hasan landed in fresh controversy on Friday as he got engaged in brawls with umpires during a Bangabandhu Dhaka Premier Division T20 League match at the Sher-e-Bangla National Stadium in Dhaka.

Shakib, who was leading Mohammedan Sporting Club, failed to keep his cool against arch-rival Abahani Limited to leave another scar on his career that is filled with tons of achievements as well as controversies.

The 34-year old first lost his cool during his lbw appeal against Mushfiqur Rahim which was turned down by an on-field umpire in the last ball of the fifth over of Abahani innings after Mohammedan scored 145-6 in their stipulated overs with Shakib top-scoring 37 runs.

Shakib, who was hit for a four and a six by Abahani skipper in the same over, felt that he had Mushfiqur leg before though umpire Imran Parvez had a different thought.

Shakib then furiously kicked the stumps and engaged in a heated conversation with the on-field umpire to stun the few hundred spectators who were watching the game from the home of cricket apart from the ones seeing it live through streaming.

The MSC skipper again lost his cool when umpires called to bring the cover due to rain in the next over as he went to the umpire from the mid-off and uprooted the stump out of despair and even tried to fix the stump in the opposite direction.

Despite the game being stopped due to rain, Shakib showed indecent gestures pointing towards Abahani’s dressing room while returning back from the field.

Abahani coach Khaled Mahmud was coming at him furiously but at that point, Shamsur Rahman came in between and settled the matter.

It was learnt later Shakib and Mahmud resolved the matter in the dressing room.

“It’s unfortunate. There can be excitement but players should keep their emotions under control. This is a List A game and there is a playing control team comprising of match officials and they will give a report and we will take a decision based on that report,” CCDM Chairman Kazi Inam Ahmed told reporters on Friday.

Shakib, however, apologised to the fans through a statement on his official Facebook page after the match in which they won by 31 runs in D/L Method after restricting Abahani to 44-6 in nine overs.

“Dear fans and followers, I am extremely sorry for losing my temper and ruining the match for everyone and especially those who are watching from home. An experienced player like me should not have reacted that way but sometimes against all odds it happens unfortunately,” wrote Shakib.

“I apologise to the teams, management, tournament officials and organizing committee for this human error. Hopefully, I won't be repeating this again in the future. Thanks and love you all,” he added.

Earlier, MSC skipper Shakib got away with only a warning from Bangladesh Cricket Board and CCDM for breaching the bio-secure environment during the ongoing DPL.