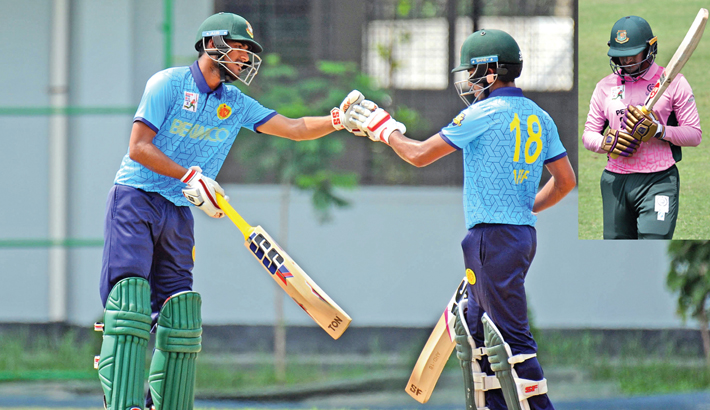 Mohammedan Sporting Club suffered their third consecutive defeat in the ongoing Bangabandhu Dhaka Premier Division T20 League as they conceded a nine-wicket thrashing against Legends of Rupganj in their sixth match at the Sher-e-Bangla National Stadium in Dhaka on Thursday.

Fifties from Mohammad Naim and Afif Hossain guided Abahani Limited to move top of the points table as they beat Shinepukur Cricket Club by 25 runs in D/L Method at the BKSP-4.

Prime Bank Cricket Club ended Prime Doleshwar Sporting Club’s unbeaten run in the ongoing meet as they registered a narrow three-run win at the BKSP-3 to climb to second place in the points table.

In the other matches, Khelaghar Samaj Kallyan Samity, Gazi Group Cricketers and Sheikh Jamal Dhanmondi Club won their respective sixth round matches on the same day.

Shuvagata Hom struck 52 off 32 balls to help Mohammedan post 113-9 in their stipulated 20 overs after they were reduced to 27-6 in the 10th over after opted to bat first.

Mohammedan skipper Shakib Al Hasan continued his woeful run with the bat in the match as well as he got dismissed for a six-ball duck while Mahmudul Hasan and Nadif Chowdhury also failed to open their account in the match.

Pinak Ghosh then made run-a-ball 51 not out while Mehedi Maruf scored 41 runs as Rupganj reached 117-1 in 18.1 overs to secure their second win in the ongoing tournament.

Naim and Afif scored 70 and 54 runs respectively as Abahani made 183-5 in their stipulated overs despite Tanvir Islam picking 4-23 for Shinepukur.

Shinepukur, who were set a revised target of 149 runs in 17 overs, could only make 123-5 to concede their fifth defeat in the tournament.

Abahani all-rounder Mohammad Saifuddin finished with 3-12 in his three overs.

Mohammad Mithun scored 55 off 50 balls to help Prime Bank post 151-7 before Mustafizur Rahman’s 3-25 restricted Prime Doleshwar to 148-9 and earn their fifth win in the competition.

Prime Doleshwar’s Kamrul Islam (38 off 12 balls not out) struck Prime Bank pacer Rubel Hossain four sixes in the last over of their chase but his effort went in vain as they fell three-run short of the target.

Mehidy Hasan and Farhad Hossain made unbeaten 40 and 36 runs respectively as Khelaghar clinched a five-run win in D/L Method at the BKSP-3 to complete their third win in the meet.

Khelaghar reached 109-3 in 16.2 overs before rain forced stopping the game as Brothers earlier made 134-5 with skipper Mizanur Rahman top-scoring with 66 off 61 balls.

Mahmudul Hasan Joy struck an unbeaten 85 off 55 balls with seven sixes and three fours as Old DOHS made 136-7 before Gazi Group reached 139-4 in 19 overs to clinch a six-wicket win in Dhaka.

Left-arm pacer Salauddin Shakil claimed career-best 5-16 to bowl Partex all out for 104 runs in 19.3 overs before Sheikh Jamal raced towards 105-4 in 17.2 overs to hand their opponents their sixth consecutive defeat in the competition at the BKSP-4.