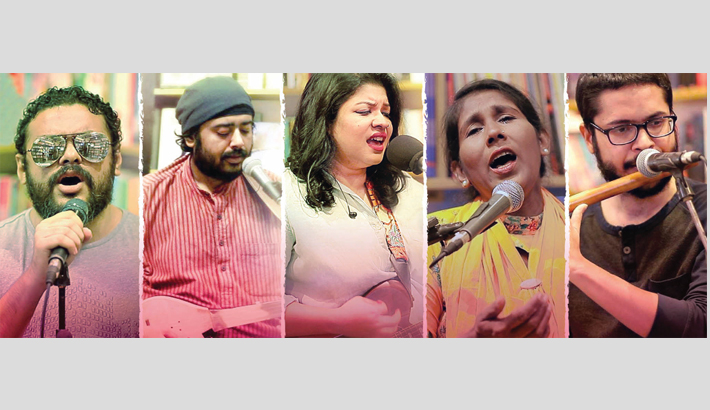 ‘Dhaka Sessions powered by bKash’ has brought flamboyance to the 2nd season of the show which already has set a new trend of presenting live music in ‘Tiny Desk Concert’ style in the city. Dhaka Sessions, a YouTube channel platform that features artistes, musicians, writers, and performers of Bangladeshi origins promoting known and hidden talents through this programme.

Season 2 of Dhaka Sessions has already featured some of the emerging as well as renowned artistes/bands like Dukhi Majeda, Baul Shamsu, The Seesaw Quartet, Labik Kamal Gourob and the band, Armeen Musa, Arbovirus and many more artistes will be appearing on the platform.

During pandemic, Dhaka Sessions has created the opportunity not only for the artistes to hit on the floor but also the viewers to be entertained with their mesmerising performances. Book Worm, a popular hub of book lovers, has extended their support by hosting the event at their premise.

In season 2, the folk music performance titled ‘Dukhi Majeda feat. Baul Shamsu’ ignited much enthusiasm and appraisal among the viewers in social media. Street singer Majeda’s story and songs are full of emotion, philosophy, joy, sorrow and devotion which connects the listeners deeply.