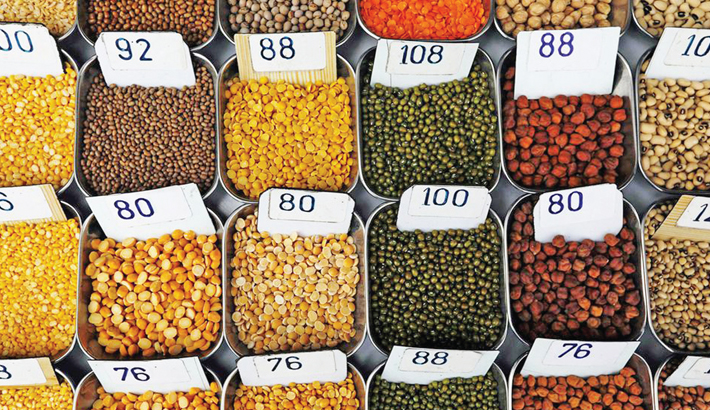 Price tags are seen on the samples of pulses that are kept on display for sale at a market in Mumbai, India recently.

PARIS: Global food import costs are expected to rise 12 per cent in 2021 to a record due to surging commodity prices and robust demand during the COVID-19 crisis, the United Nations food agency said.

The world’s food import bill, including shipping costs, is projected to reach $1.715 trillion this year, from $1.530 trillion in 2020, the Food and Agriculture Organization (FAO) said in its twice-yearly Food Outlook report on Thursday, report agencies.

Growth in agricultural trade during the pandemic showed the inelastic nature of food consumption and the resilience of international markets, but price rises since late 2020 were raising risks for poorer import-reliant countries, the FAO said.

Its monthly food price index hit a 10-year high in May, reflecting sharp gains for cereals, vegetable oils and sugar. The FAO said a separate index of food import values, including freight costs that have also soared, reached a record in March this year, surpassing levels seen during previous food price spikes in 2006-2008 and 2010-2012. A strong volume increase for staple food imports last year had already driven up global import costs 3 per cent to a record.

Exceptions were beverages and fish products that are more sensitive to economic conditions and which saw demand curbed by supply chain difficulties, the FAO said.

China’s imports have been a driver of agricultural demand and prices in the past year, partly reflecting Beijing’s efforts to rebuild its pig industry after a disease outbreak. Chinese maize (corn) imports in the upcoming 2021/22 season were expected to rise to 24 million tonnes, keeping China as the world’s top importer after its maize imports are expected to quadruple to 22 million tonnes in 2020/21, the FAO forecast.

A recovery in Chinese pork output was expected to reduce global trade, offsetting growth in beef and poultry flows to leave overall meat trade stable this year, the FAO said.