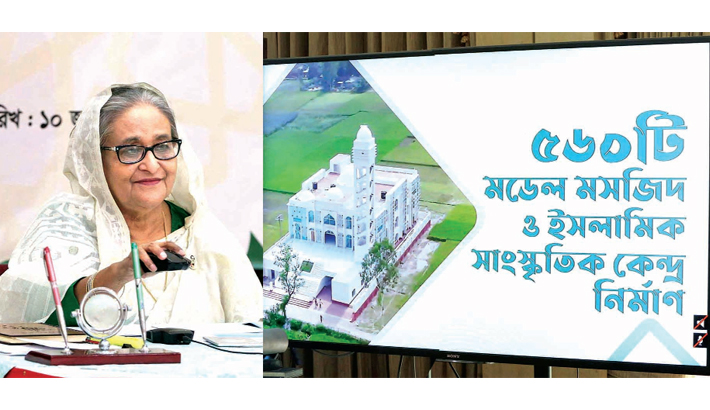 Prime Minister Sheikh Hasina on Thursday inaugurates 50 model mosques, out of total 560, across the country on the occasion of ‘Mujib Barsho’. The premier virtually joined the inauguration programme held at Osmani Memorial Auditorium in the capital from her official Ganabhaban residence. - PID photo

Prime Minister Sheikh Hasina on Thursday said model mosques across the country are being established to provide education, create awareness and increase knowledge about Islam among the people to prevent different social menaces.

“Awareness has to be built in society against drugs, women repression, child repression and sexual abuse as like as the measures taken against terrorism, and we wanted to establish these mosques in such ways to provide all types of education, create awareness and increase knowledge about Islam,” she said.

She urged the people to put concentration in terms of religious views on child marriage, dowry, violence against women and drugs.

Referring to the measures taken by the government against terrorism engaging people of all strata of society in upazila level and elsewhere, Sheikh Hasina said mass awareness has to be built against drugs, women as well as child repression and sexual abuse in such ways.

To this end, the government has established these model mosques, she added.

Laying emphasis on mass awareness about drugs, the Prime Minister said drugs are pulling the society towards destruction and that is why social awareness is needed to free people from the bite of drugs.

On the occasion of “Mujib Borsha”, she inaugurated 50 model mosques, out of total 560, simultaneously across the country, aimed at preaching the true messages of Islam to eliminate religious misconceptions. With State Minister for Religious Affairs Md. Faridul Haque Khan, MP in the chair, Religious Affairs Secretary Md. Nurul Islam delivered the welcome address.

A video on Bangabandhu and Islam was screened in the function.

The Prime Minister said she is feeling delighted that these model mosques would preach true messages of Islam and disseminate culture of Islam and finally people from both home and abroad could realize the true essence of Islam.

Besides, religious education, training, Din-E-Dawah activities etc would also be conducted from these mosques alongside building awareness against terrorism-militancy, violence against women as well, she said.

Denouncing terrorism and militancy, Sheikh Hasina said a quarter is creating militancy and killing people in the name of Islam aiming to go to heaven. “My question is who went to heaven through this killing, can anyone say?” she said.

But, these quarters of people have damaged most to the holy Islam, a religion of peace, she noted.

“I believe Islam is the best religion in the world, but irony is that a certain quarter of people are stigmatizing Islam through creating militancy, killing people. It’s not only damaging the serenity of Islam, but also destroying Image of Islam across the globe,” she added.

Sheikh Hasina urged the Islamic scholars, guardians, teachers, political leaders and activists to play role in keeping away the youths from the destructive paths such as militancy and terrorism.

Mentioning that construction of mosques across the country was her party’s (Awami League) election manifesto, she said they have materialized it following the footsteps of Father of the Nation Bangabandhu Sheikh Mujibur Rahman.

She also recalled different initiatives taken by the Bangabandhu for Islam such as establishment of Islamic Foundation and Madrasha Education Board, ban of horse race and gambling, ban of liquor through enacting law, allocation of land for Bishwa Ijtema and Tablig’s Markaz in Tongi and Kakrail respectively, recitation of Holy Quran in the beginning and end of programme in Betar and Bangladesh Television, establishment of diplomatic relations with Muslim worlds and attaining of OIC membership etc.

The Prime Minister said her government has introduced mosque-based education and allocated a special grant to it. In addition, they also established a welfare trust for Imam-Muazzin, acknowledged Qawmi Madrasha and provided financial assistance to Imam-Muazzin during Covid-19 pandemic, she added.

She said they have translated and digitized the Holy Quaran in Bangla, English and Arabic to make it accessible among the people.

The Awami League both in power and opposition always tried to do something better for the Hajj pilgrims, she added.

Imbued with the spirit of Islam and following the footsteps of Father of the Nation Bangabandhu Sheikh Mujibur Rahman, Prime Minister Sheikh Hasina has come up with the idea of constructing the 560 model mosques across the country involving Taka 8,722 crore.

Under the category A, some 69 four-storey mosques having the elevator facility and a floor space of 2,360.09 square metres each are being constructed in 64 districts and city corporation areas.