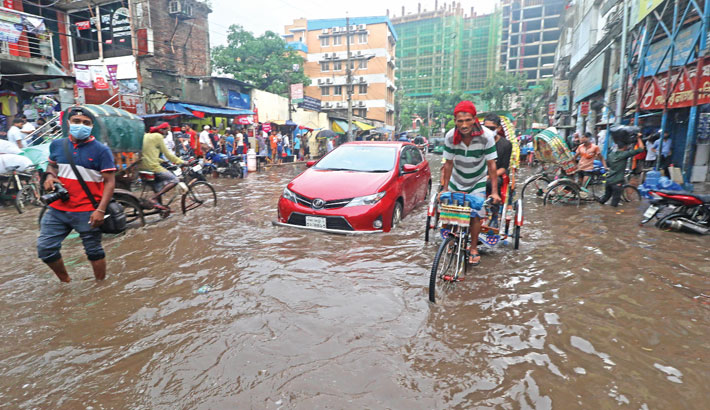 Different parts of the capital go under water even after a light rain on Wednesday. The photo was taken from Fulbaria area. —MD NASIR UDDIN

Like previous years, the city dwellers are likely to experience waterlogging during the rainy season this time too as there is no possibility of repairing the faulty stormwater pumping machines at Rampura and Kamalapur stations anytime soon.

They also said they need to bring experts from abroad to fix the problem.

Sources said Dhaka Water Supply and Sewerage Authority (DWASA) installed the pumping machines under a project back in 2016 to save the city from the severe waterlogging problem.

Dhaka WASA recently handed over the charge of the pumping stations to DSCC and DNCC as per the government’s decision.

Engineers of DSCC and DNCC said they found two out of five pumps at Kamalapur station and two out of three pumps at Rampura station out of order which cannot be fixed without the help of original manufactures of the machines.

Assistant Engineer (Mechanical) of DNCC Ariful Hasan said, “We’ve identified the technical glitch but we couldn’t fix it. The original manufactures can solve the problem as they know the source code of the VFD.”

He also said, “Consultancy firm Sigma is the expert body in the country to solve this kind of technical problem and we’ll engage them. They’ll hire expert engineers from the manufacturing company. But the process is being delayed due to the coronavirus pandemic.”

Talking to the Daily Sun, Executive Engineer of Waste Management department at DSCC Shafiullah Siddiqui Bhuiyan said they have also appointed ‘Sigma Consultancy Services’ to find out the fault. “They’ve done their field work and will submit their findings very soon. We’ll float a tender asking an expert company to resolve the problem.”

He also said it will take at least two months to complete the process of appointing a company to resolve the problem. “If there’s a major problem in the pumping machines, it’ll take 6-12 months to fix it,” he added.