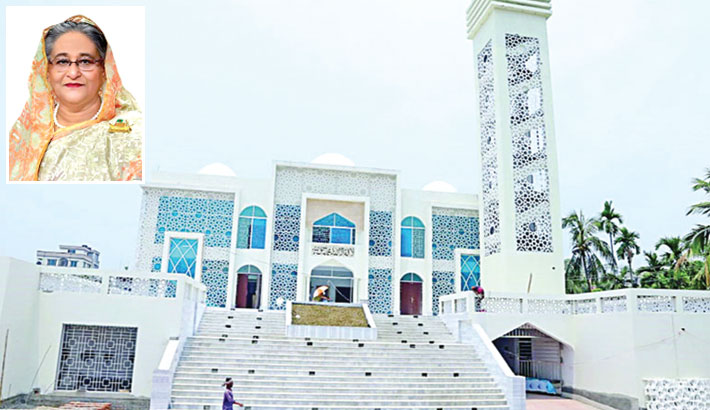 Prime Minister Sheikh Hasina will virtually inaugurate 50 model mosques across the country today, out of 560, as part of the government’s initiatives marking the Mujib Year.

The premier will inaugurate the mosques through videoconferencing from her official residence Ganabhaban.

“Prime Minister Sheikh Hasina will formally inaugurate the mosques at 10:30 am through videoconferencing,” Deputy Project Director Shafique Talukder told reporters at a briefing on the premises of Savar Upazila Model Mosque on Wednesday.

Every mosque with modern architectural features will have 13 types of modern facilities --- Islamic Cultural Centre, Din-E-Dawah activities, Quran Hefzkhana, children and mass education system, accommodation facilities for both local and foreign tourists, arrangement of bath and burial for deceased, enrollment and training of hajj pilgrims, car parking and accommodation for Imam-Muazzin and employees of the cultural centers.

Some 50 mosques are being prepared under the landmark 560-model-mosque project, considered to be the world’s largest mosques project, for inauguration in September under the second phase and another 50 will be opened in December under the third phase.

Imbued with the spirit of Islam and following the footsteps of Father of the Nation, Prime Minister Sheikh Hasina has come up with the idea of constructing the 560 model mosques across the country involving Tk 8,722 crore, Deputy Project Director Shafique Talukder said.

Besides, 100 more model mosques will also be inaugurated by the end of this year marking the birth centenary of Father of the Nation Bangabandhu Sheikh Mujibur Rahman, he added.

The project director said construction work of 420 model mosques and cultural centers have started while the construction of the remaining mosques would start soon.

A festive mood has been prevailing in those areas as people have been enthusiastically waiting for the inauguration of the mosques.

“Thanks to our honorable Prime Minister for taking such a religious project that proves her devotion to Islam,” he added.