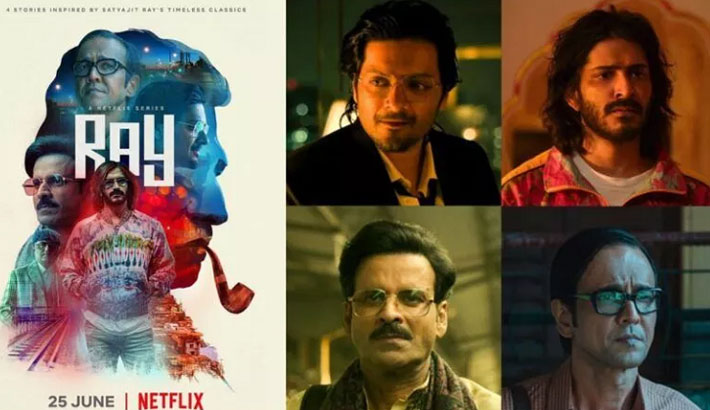 Netflix on Tuesday dropped the trailer of its next original ‘Ray’. The anthology will have four gripping stories inspired by the works of legendary filmmaker Satyajit Ray.  Bollywood actors Manoj Bajpayee, Ali Fazal, Harshvarrdhan Kapoor and Kay Kay Menon will shoulder each story based on ego, revenge, envy and betrayal, reports Indian Express.

The trailer begins with a voice-over stating that mankind is no less than God as it too gives birth and creates another human. We are then introduced to Ipsit Nair (Fazal), a man who is said to have the memory of a computer. Next up is Harshvardhan’s Bollywood superstar who encounters a God woman and is amazed at her popularity. Manoj Bajpayee, fresh from the success of ‘The Family Man 2’, plays Musafir Ali, a ghazal singer, who is on a journey to seek his lost fame. And finally, we get a glimpse of Kay Kay Menon’s character, who, despite a stable job, wants to create art as a makeup artist.

The four stories titled ‘Hungama Hai Kyon Barpa’, ‘Forget Me Not’, ‘Bahrupiya’ and ‘Spotlight’ promise an engaging and thrilling ride for the audience. Towards the end, the voice-over warns that whenever a man believes himself to be God, he has a major downfall.

‘Ray’ has been helmed by Abhishek Chaubey, Srijit Mukherji and Vasan Bala. The original will be premiered on Netflix on June 25.