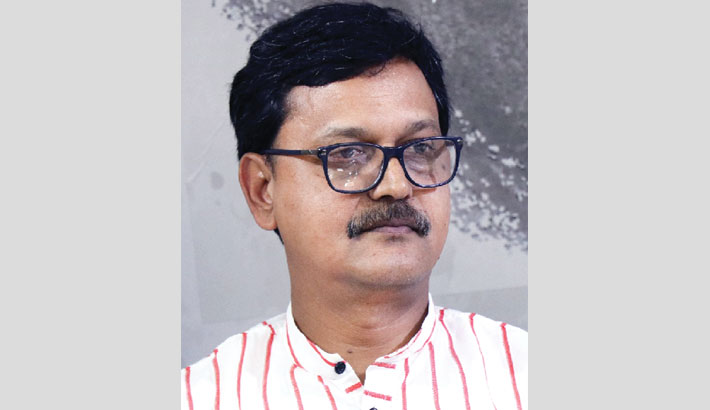 Bangladesh is a riverine country. From time immemorial, we are tied to the umbilical cord to rivers. Our livelihood, transportation, agriculture, industry, economy, consciousness, culture - all are fluvial. It can be said that rivers were the sole bridging point between our social and commercial relationship. Rivers are such an entity in the life of a Bangalee that it has got honed in the innermost cognition of our blood vessels for ages. Whenever we had been tested by the voice of nation, crisis of existence and necessity of self-introduction, at those critical moments our rivers surged through our consciousness and kept vigilance like a sibling. During the Liberation War, in the hearts of millions of Bangladeshis, one fiery revolutionary slogan was proclaimed – ‘Your and my address is Padma, Meghna, Jamuna.’ We realized that our destination was Padma, Meghna, and Jamuna; our only hallmark was – ‘This struggle is for our freedom, this struggle is for our independence.’ At that time, millions of Bangalees plunged into the war against enemies with their lives at stake, responding to the call made by the greatest Bangalee of all time- Bangabandhu Sheikh Mujibur Rahman. With their majestic sacrifice, we have obtained an independent country- Bangladesh, riverine Bangladesh.

For the Mujib Birth Centenary and Golden Jubilee of Independence, we vowed that Bangladesh will stand tall in the World Map with her head held high. We can state with pride and dignity, Bangladesh stands up right now. Once upon a time, for constructing a road, a small bridge or even a culvert, foreign assistance was required. But now Bangladesh is building the Rooppur Nuclear Power Plant. The Payra Deep Seaport is also being constructed. Once Khaleda-Yunus conspired against the Padma Bridge but that bridge has now surfaced over water in front of people. Now the whole world witnesses Bangladesh through all these various development projects. At present, Bangladesh is the name of an esteemed developing country. For taking Bangladesh to such a lofty height, the person whose contribution is immense is the daughter of Bangabandhu, Gem of the Country, honourable Prime Minister Sheikh Hasina.

Currently, public healthcare service in Bangladesh has improved and at the same time, medical facilities have reached the doorsteps of Bangladeshi people. People no longer die without treatment. There is shortage neither of food nor of clothes. Helpless, vagabond people are being given shelter; homeless people are being given houses for free. Free books are being distributed to the students of all educational institutions up to secondary level. Every kid of the country is now attending schools. No child will remain without education, no human being will remain homeless – this is our oath. It has been possible to advance gradually to this state of infinite possibilities because of the appropriate leadership of the Gem of the Country, Prime Minister Sheikh Hasina. Many governments were formed before her government, but they only filled office and left. But they did nothing for the public. They repeatedly looted our country’s wealth, jested with people’s fate, and turned the country into a centre for corruption. They tried to disable the youth by creating a chain of drugs, terrorism, and degenerated culture. With ardent efforts put forth by the present government, Bangladesh has now made an about-turn from its previous wretched condition.

Bangladesh is a developing country now. Therefore, we have started to dream to grow into a developed country from a developing one. The country is forging ahead. Even amid the ongoing pandemic crisis, Bangladesh has hit a reserve of 43 billion dollars in foreign exchange. GDP per capita income has surpassed 2,000 dollars. With the appropriate leadership of honourable Prime Minister Sheikh Hasina, the country is riding a rollercoaster of development and progression with glory. Honourable Prime Minister announced a manifesto of a change in upcoming days for betterment. She has transmuted Bangladesh into a developing digital Bangladesh. She not only makes us dream for future but materializes the dream into reality too. With her leadership, we have reached the row of developing countries from a poor country and by 2041 we will transform ours into a developed one. Hence, we are on the way to conquering our dreams. Today each person of Bangladesh believes - the days have changed.  Many challenges created impediment to the development of the country. We have been successful to vanquish all challenges with the guidance of the Prime Minister. The government is implementing important mega projects with self-financed endorsement. Today people of the country assert with pride – the Padma Bridge is being built with our own money. With the leadership of the honourable Prime Minister, Bangladesh has joined the nuclear club by constructing the Rooppur Nuclear Power Plant. For the first time, Bangabandhu Underwater Expressway Tunnel is going to be built under Karnaphuli River. Previously there was no highway; now city transit system is being radically altered with the construction of modern elevated expressway, metro railway and so on. Furthermore, an extensive direct railway line is under construction from Chattogram to Ghumdhum, Cox’s Bazar.

With the ingenious and sagacious leadership of the ideal daughter of the Father of the Nation, Bangabandhu Sheikh Mujibur Rahman, Gem of the Country, Prime Minister Sheikh Hasina, we are going to be bestowed with an up-to-date developed Bangladesh. The activities of the Prime Minister are not only being praised in the domestic land; rather being applauded all over the world. In the arena of development, she is now a ‘role model’ to the world. Bangladesh will step into a developed country with her leadership skill before 2041 – it is all of our hope.

In the frontiers of naval and marine sectors of the country, there are endless potentials for advancement. By utilizing those possibilities with expert hands, we have to lead the country ahead. The activities of the Padma Bridge and the Payra Seaport will be extended across whole Bangladesh gradually and each citizen of the country will be benefited from these directly and indirectly. Cerulean marine resources will be conducive to domestic economic growth of Bangladesh. Our coastal riches will play the most important role to metamorphose us into a developed country by 2041.

However, we can never progress forsaking the ideals of Bangabandhu. After the contribution made by Bangabandhu for 3 and a half years during his ministerial service, no one else bequeathed anything to Bangladesh. Bangladesh took a path of regression. During Bangabandhu’s time, the Bangladesh Shipping Corporation began its journey with 19 ships. By 2010, the number decreased to 2 ships. But instead, there should have been hundreds of ships by that time. Bangladesh walked backward, that’s why from 19 ships, and the figure tumbled down to only 2. With the leadership of the Deshratna (Gem of the Country), the Bangladesh Shipping Corporation has taken a U-turn again. Bangladesh did not have a deep water pier, but at present a deep harbour is being built at Matarbari in Cox’s Bazar with an estimated project of 17,000 crore taka. The Payra Haven is visible today. Ships from different countries are making anchorage at the Mongla Port. In this way, Bangladesh is making progression in all aspects.

We are in the Mujib Millennium and about to embark upon the Golden Jubilee of Independence. Prime Minister Sheikh Hasina has emboldened the people of Bangladesh. She has opened the country to the world. We are also striving to make our presence felt all over the globe. The expedition will be a long one. Our Prime Minister Sheikh Hasina is leading the maritime sector forward to reach that goal.

For the economic development of our riverine Bangladesh, the role of shipping belt is important. Considering the importance of rivers for the development of agriculture, fisheries, trade and commerce, and communication, a holistic and integrated programme has been launched to protect rivers. With the visionary leadership and general instructions of the well qualified daughter of the Father of the Nation, the Gem of the Country, Prime Minister Sheikh Hasina, the maritime sector is spreading fast. Different river ports have been modernized and renovated. With a view to building an epoch-making, modern and eco-friendly aquamarine port, suitable for the twenty first century, the third largest seaport in the country, the Payra Deep Seaport is being constructed in Patuakhali to meet the increasing demand of import-export. By 2023, the Payra port will be furnished as a world class up-to-date harbour.

To excavate waterways, 34 dredger machines have been acquired and to manage ferry-crossing properly, 17 ferries have been built. More dredgers for excavation are going to be collected and capital dredging work is going on. Necessary initiatives have been taken for the excavation programme of 10,000 kilometre of waterways, eviction of grabbers of river banks and to bring back the navigability of the rivers. To ensure and enhance the navigability of rivers and to prevent occupation and pollution, the National River Conservation Commission has been formed. An Inland Container Terminal has been built at Pangaon. Implementation of different large-scale activities has been made to create mobility in Chattogram and Mongla ports, and a plan for establishing a bay-terminal in Chattogram is under way. In order to develop human resources in maritime sector, Bangabandhu Sheikh Mujibur Rahman Maritime University and four new marine academies have been founded in Sylhet, Rangpur, Barishal and Pabna. Steps have been taken to modernize and renovate the Bangladesh Shipping Corporation, and six ships have been acquired; further acquisition of another 6 ships is going to be made. For sailors who work on foreign ships a procedure of providing machine readable identity papers ‘ID Card’ is being operated. A venture for the development of ten new land ports including Benapole Land Port is going on.

The Prime Minister of a war-torn, newly liberated country Bangabandhu Sheikh Mujibur Rahman made Bangladesh shine wherever he went on this planet. Today we can dream because of the political philosophy of Bangabandhu. At this moment ours is a middle-income country, on the way to be a developed one – it has been possible for internalizing the ideology of Bangabandhu. If we can retain Bangabandhu each moment of every day, only then we shall march forward. From 1949 to 2021, the Awami League has been into politics to establish the rights of the people of this land. Whenever this party has taken the responsibility to administer the country, people have achieved something. Behind every country’s progress, there is politics. If that politics is for honesty, righteousness and patriotism, the country cannot lag behind. Bangabandhu struggled for 24 years with an honest and upright aim in view. For this reason, he could emancipate a country.

The worthy daughter of the Father of the Nation, Sheikh Hasina is running the country with transparency and devotion. On the other hand, a profound conspiracy is being plotted against Bangladesh. Even plots against our patriotic army are being framed. The Bangladesh Army has been continuously playing a gigantic role in the development of Bangladesh and for world peace. Nonetheless, a deep conspiracy is going on to sabotage the army by making its contribution questionable. When with the leadership of the honourable Prime Minister, Bangladesh has reached a prestigious position of a free democratic country, the economy of Bangladesh has become a matter of pride, at that moment an attempt to create an arena of conspiracy in the international hemisphere is being made to set back its progress. We must remain extremely vigilant against these anti-national schemes.

The writer is the State Minister in Charge of the Ministry of Shipping.