Govt bldgs to be fined four times higher than private ones: Taposh 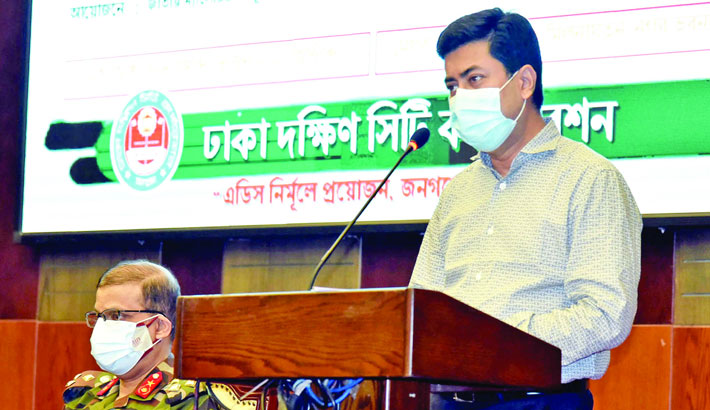 DSCC Mayor Sheikh Fazle Noor Taposh speaks at a meeting on elimination of Malaria and controlling Aedes mosquito at Nagar Bhaban in the capital on Tuesday.

Dhaka South City Corporation (DSCC) Mayor Sheikh Fazle Noor Taposh on Tuesday said that they would fine the buildings of the government four times higher than private ones for breeding Aedes mosquito.

He made the remark while speaking at a meeting on elimination of Malaria and controlling Aedes mosquito organised by Directorate General of Health Services at Nagar Bhaban.

“We are now conducting drives in the government owned housing and under-construction building to destroy the Aedes mosquito.  If Aedes larvae are found inside any state-owned building, the mobile court will charge four times higher than the privately-owned building owners,” he said.

The mayor alleged, “Our mosquito control workers and councilors are barred from entering different government colonies and under-construction buildings.  As a result, there has been a gap in the mosquito control work. If once Aedes starts breeding in a building, it turns a big hotspot.”

The mayor requested councilors to play a proactive role to destroy Aedes larvae housing in the city buildings.