People get some relief from water crisis in Khulna div

Rajib Kanti Roy, back from Khulna and Satkhira 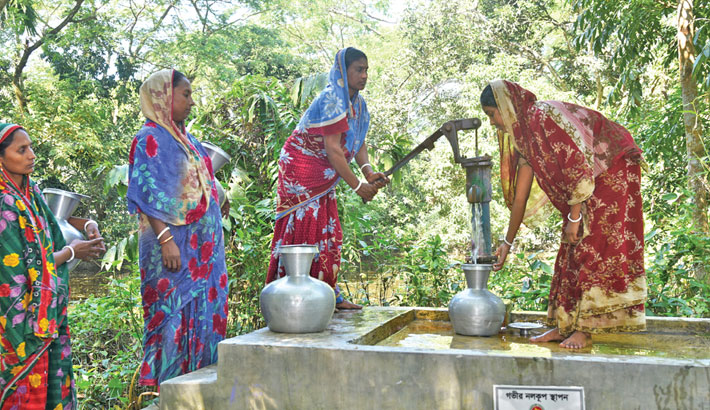 People of the country’s southern districts, who had long been suffering for lack of pure drinking water, heave a sigh of relief as some local government projects are ensuring drinkable water for them. — sun photo

Rivers, canals, shrimp enclosures, ponds and other water bodies and tube wells full of water surround the whole area, yet there is no pure or drinkable water available for the people residing in the adjacent villages.

Water in the water bodies is salty while water in the tube wells is contaminated due to arsenic.

Situation of the country’s southern region and its people reminds Samuel Taylor Coleridge’s famous poem “The Rime of the Ancient Mariner” and its central character Mariner who says, “Water, water, every where, / Nor any drop to drink”.

Mariner, however, could blame himself for his fate as he killed innocent bird Albatross but the ordinary people of southern region are suffering without doing any sin.

No matter a family is rich or poor, all of them need to buy pure water to drink. Millions of people there use impure water from different water bodies to do all their daily activities, including cooking.

Consequently, they have been suffering from various diseases like diarrhoea, cholera, gastric and skin related complications.

However, the good thing is that a few organisations have stepped forward to ease their crisis.

Hygiene, Sanitation and Water Supply (HYSAWA), a non-profit financing organisation, is playing a significant role in this regard.

This development partner of Bangladesh government, in association with the Ministry of Local Government Division (LGD), and financial support of the Switzerland government through Swiss Agency for Development and Cooperation (SDC), is providing all out support to the union councils to implement a number of projects to reduce water crisis, ensure hygiene and offer sanitation facilities there.

According to locals, HYSAWA is assisting union councils in setting up ‘rain water harvesting system’ and ‘household latrines’.

Apart from these, the organisation is providing money to the union councils to establish a number of water treatment plants under ‘Reverse Osmosis Water Purification and Supply Project’ from where several thousands of coastal people are collecting pure water at 50 paisa per litre.

HYSAWA began financing such projects in 2007 to ensure safe water and sanitation for helping the country achieve the Millennium Development Goals (MDGs).

HYSAWA, under its ‘rain water harvesting system’, provided a 3,000 litre water tank to Moshiur Rahman, an agricultural worker at Sridhorpur village in Dargapur union of Ashashuni upazila under Satkhira district.

“We can neither drink water from water bodies nor from tube wells as these are full of salty or contaminated water. Every month my family needed to spend Tk 600 to 800 to buy drinkable water which added extra burden on us,” he said. “Sometimes we had to drink contaminated water due to lack of money and consequently suffer from different waterborne diseases. But HYSAWA’s rain water harvesting system has freed us from that burden and we are now leading a healthy life,” he added.

Rezaul Molla, a resident of Ukra village in Khornia union of Dumuria upazila under Khulna district, once drove a rickshaw van. But since he got paralysed 8-9 years ago, he is jobless. HYSAWA built a healthy toilet in his house.

Molla said, “I had to suffer a lot while using worn out toilet due to my poor health. I had no way to build a new toilet. However, a healthy toilet is built in my house which has eased my pain.”

Subroto Golder, a local resident, said earlier they had to walk several kilometres to collect drinkable water but they are now getting water easily due to the water purification plant.

“Most of the water bodies in Satkhira, Khuna, Bagerhat and other districts of the region are salty and deep tube wells cannot provide pure water there due to arsenic problem or the fall of water level underground. People of these areas are struggling for lack of pure water for years and the situation has deteriorated in the recent years due to climate change,” said Mahbub Rashid, programme officer of HYSAWA.

“We are identifying the poor and most underprivileged people in these areas with the help of Community Development Forum (CDF) and providing fund to the union councils to reduce their crisis through implementing suitable projects,” he added.