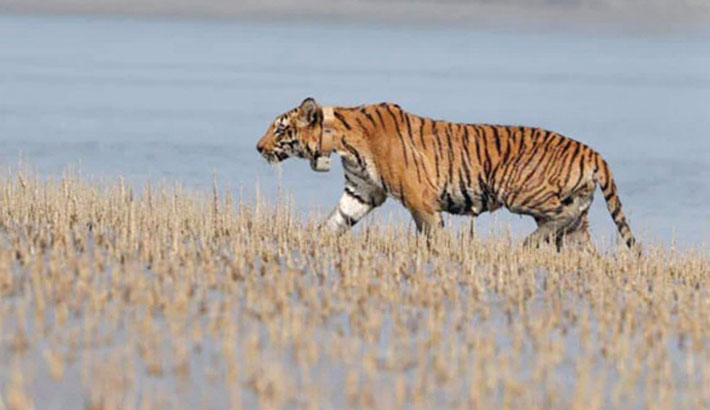 A tiger fitted with a radio collar has crossed over to the Bangladesh part of the Sundarbans from the Indian part of the mangrove forest after travelling nearly 100 kilometres in four months.

“The tiger which had been radio-collared in India was found to have travelled around 100km to reach the Sundarbans in Bangladesh over a period of four months,” West Bengal’s chief wildlife warden VK Yadav was quoted as saying in different Indian media including the Times of India.

His long and arduous journey to Bangladesh involved several hurdles including some rivers wider than a kilometre. Braving all odds, the tiger moved across three islands in the span of four months, Yadav said, adding that he did not venture near human habitats.

The tiger could originally have come from Bangladesh before foresters captured him for radio-collaring, Yadav added.

“The male tiger is now in the Bangladesh part of Sundarbans and has similarity with Bangladeshi tigers spotted in a census in 2018,” said Dr. Abu Naser Mohsin Hossain, divisional forest officer of Sundarbans West Division in Khulna.

The forest official said the male tiger’s territory is usually the Sathkhira part of Bangladesh and the adjacent Indian part, he said.

The male tiger was radio-collared in December 2020 to enable foresters to track his movement patterns near human beings. He was captured from Harinbhanga forest just opposite the Harikhali camp under Bashirhat range in Bengal and later released with the satellite collar on December 27, reported Hindustan Times. “After initial movements for a few days on the Indian side, it started venturing into the Talpatti island in Bangladesh Sundarbans and crossed rivers such as Choto, Harikhali, Boro Harikhali and even the Raimangal,” Yadav said different media.