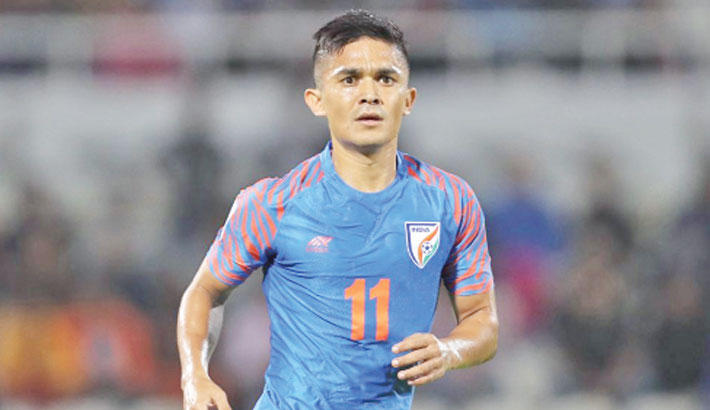 The heartbreaking 0-2 goals defeat against India uprooted Bangladesh’s hopes of earning a spot in the third round of AFC Asian Cup 2023 qualifiers and a dream to end the 22-year win drought against their neighbours at Jassim Bin Hamad Stadium in Doha Monday night, courtesy of a late brace from Indian captain Sunil Chettri.

Bangladesh conceded two unexpected goals within a span of 13 minutes after successfully keeping India and Chettri at bay for 79 minutes.

In the 35th minute, unmarked defender Chinglensana Singh created space into the Bangladesh box and sent the ball with a low header off a corner kick, but Riyadul Hasan denied his effort saving the ball from the goal line. In the 63rd minute, Chhetri, who was unmarked inside the penalty box, headed the ball wide while midfielder Brandon Fernandes delivered a perfect cross from a set-piece.

But the day was not for Bangladesh and their smiles faded away just after 16 minutes while Chhetri gave the compensation to his team scoring his 73rd international goal with a header utilising Bangladeshi’s defense error, off a beautiful curling cross by substitute midfielder Muhammed Ashique Kuruniyan from the left flank in the 79th minute.

Chhetri put the ball home with a brilliant first touch as the ball raced past Bangladesh goalkeeper Anisur Rahman Zico, who was tired and already gave up the match, into the top left corner following an excellent build-up play in the 92 minutes.

With the 2-0 win, India climbed up to third in the standings earning 6 points from a one-off win and three draws as well as almost confirmed a direct spot in the third round of AFC Asian Cup 2023 qualifiers.

However, it was not the first time when the men in red and green were knocked down by Chhetri. In his 17-year international career, the Indian forward averted Bangladesh a total of three times since SAFF Championship 2013 in Nepal. Riding on his equaliser in the 95th minute, India played a draw in the group stage and qualified for the semifinals. India ended runners-up there conceding a 2-0 goals defeat to Afghanistan.

Bangladesh’s two former national players and prominent coaches Shafiqul Islam Manik and Alfaz Ahmed blamed the national team’s lack of confidence and nervousness behind the fatal defeat against their Indian counterpart. They hailed Sunil Chettri for his brilliant performance in the game.