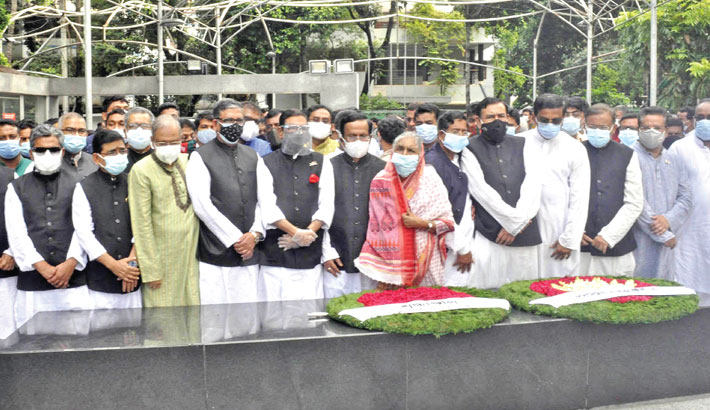 The historic Six-point Day, commemorating the Awami League-led movement for autonomy in 1966 that ultimately led to the liberation struggle, was observed with befitting manner across the country on Monday.

On behalf of Prime Minister Sheikh Hasina, Awami League General Secretary Obaidul Quader, also the road transport and bridges minister, paid homage to Father of the Nation Bangabandhu Sheikh Mujibur Rahman by placing a wreath at the portrait of the great leader on the historic Bangabandhu Bhaban premises at Dhanmondi 32 in the capital  at 9:00am.

Later, Quader along with party leaders paid tributes to Bangabandhu by laying a wreath at his portrait.

Later, leaders and activists of AL associate bodies and affiliated organisations paid homage to the Father of the Nation.

On this day in 1966, 11 people, including Monu Mia, Shafiq and Shamsul Haque, were killed in police firing during a hartal called by Awami League in support of its six-point programme announced by the party leader Sheikh Mujibur Rahman, demanding autonomy for the then East Pakistan (Now Bangladesh).