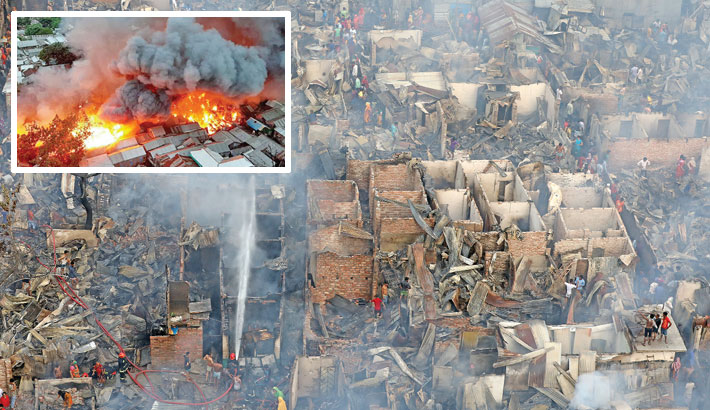 Firefighters are trying to extinguish a fire that broke out at ‘Sattola’ slum in the capital’s Mohakhali area in the early hours of Monday. (Inset), Smoke billows up during the devastating fire that gutted around 150 shanties at the slum. – SUN PHOTO

Nearly 150 shanties were destroyed in a devastating fire that broke out in ‘Sattola slum, widely known as Sattola Bosti’, in the capital’s Mohakhali area on Monday morning.

A total of 141 shanties were gutted by the fire that broke out at 3:40am, said Mahfuz Riben, duty officer of Fire Service and Civil Defence.

At least 18 firefighting units rushed to the spot and brought the fire under control around 6:35am, he said.

The slum people might have lost their belongings worth around Tk21.15 lakh.  A probe committee was formed to investigate the fire incident, he also said.

Aklima Begum, one of the victims, said she had lost all her belongings in the fire.

“We could not collect anything from my house due to the thick smoke. I along with my family members have just escaped the death. All my belongings have been burnt into ashes before my eyes,” she said crying.

The fire might have been the result of sabotage by some vested quarters, she suspected. Another victim Minu Begum said she woke up hearing the people screaming after the fire had broken out.

“I managed to get out of my house with my mentally sick husband and two children. But I could not take out my belonging,” she said.

Dhaka North City Corporation (DNCC) Mayor Atiqul islam visited the site and promised they would provide compensation amounting to Tk 5,000 to each of the victims.

The mayor said, “I have talked to the fire victims. We will arrange corrugated iron sheets for their shelter and foods for the hungry people. We will build multi-storey building at Korail Slum for the slum dwellers. We will provide housing facility to all the slum dwellers gradually.”

He also said, “For solving the problem of slum dwellers we held meeting several times. It is not possible to solve the problem overnight. The government has also direction to take elaborate plan to rehabilitate the slum dwellers in the capital.”

Later, Director General of FSCD Md Sazzad Hussain also visited the spot and said that the fire might have been originated from illegal gas and electricity connection.