The Man behind Monga Mitigation 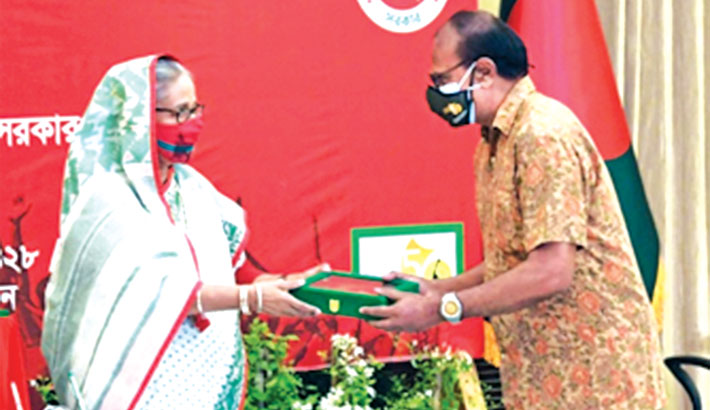 Dr. Mrinmoy Guha Neogi, a noted agricultural scientist currently working as Deputy Project Leader for the University of Western Australia, has been awarded the Independence Award – 2021 for his outstanding contribution to science and technology. Prime Minister handed over the highest state award to him on 20 May 2021. In an interview with Labiba Zoha of the Daily Sun, Dr. Neogi spoke about how research and innovation helped farming communities overcome
insurmountable odds and the country achieve bumper crop production. Following is an excerpt of the interview:

Q: First I would like to congratulate you on receiving the Independence Award. What is your feeling after receiving the highest state award?

A: This highest prestigious state recognition “Independence Award” in Science and Technology overwhelms me. Receiving the award from the honourable Prime Minister Her Excellency Sheikh Hasina was my long-cherished dream. The Prime Minister is expecting more and more viable research outcomes from my end as she assured me of her all-out support. Now, I’m feeling more responsible to carry out my duty towards my country.

Q: You have been given the award for your contribution to agricultural science and technology which helped the country mitigate Monga in the northern region. Would you tell us more about the problem and what prompted you to work on it?

A: I joined RDRS in 1993 during Monga months, i.e. on 2nd October which was my first visit to Rangpur area. This is my first visit to northern Bangladesh. Just immediately after joining, I visited rural and remote char areas of Kurigram district to establish my project activities.

During my visit in such remote areas, I availed huge opportunities to meet with the farm families and agricultural day labourers and realised that the poor farm families of these areas are passing most of the days in Monga months with one meal in a day and even some days without having any meal during mid-September to mid-November. Before joining RDRS, I had no practical idea about Monga except a little understanding of it derived from news reports.

I found it the most crucial issue of poor farm families in northern Bangladesh. It was the most burdensome issue for the whole nation and the highest priority for the government to mitigate it!

I asked myself – why Monga is in northern Bangladesh, and why it is not happening in other areas of Bangladesh? In addition, what are the root causes of Monga? From a survey in the greater Rangpur district, it was identified that the rural poor who are 67 per cent of the total population in greater Rangpur districts who relied on farming and suffered severe seasonal hardship, when household’s farm employment and food availability dried up. Then I realised that Monga was a famine-like situation during mid-September to mid-November (Awshin-Kartik as Bengali months) in which the poor suffer acute deprivation caused by their lack of purchasing power arising from seasonal scarcity of gainful employment. Due to the presence of Aman rice crops in most of the lands in November, farmers have no scope to avail the right time to cultivate such winter crops. As a result, this delayed cultivation hampers the normal yield and increases the production cost of different winter crops.

Then, I realised that the short duration or early maturing Aman rice variety instead of the existing long duration rice variety might be the good option to overcome Monga, through which farmers and day labourers may be able to harvest rice during Monga months, i.e. in September-October instead of late November-December.

Q: Could you elaborate on how your work benefited farmers?

A: In such a way, I’ve introduced the short-duration rice varieties in the existing cropping pattern and developed a suitable technology for the farm households to mitigate Monga. Therefore, the farm households and day labourers of short-duration rice growers are now able to harvest rice in Monga months and thus able to overcome the crisis easily.

In addition, the early maturing Aman rice growers are now able to cultivate next crops like potato, maize, wheat, etc. at right time, i.e. in November and getting more yields from these winter crops due to timely planting. Through this change in technologies, farmers are now able to minimise the production cost of winter crops by reducing the use of pesticides, irrigation, fertilizers, inter-cultural operations, etc., while they are getting higher income from their produce for early marketing.

Q: What is the current scenario? Has Monga been fully eliminated?

A: I’ve started to extend my research findings to the farm households from 2005 and gradually extended the technology to 50 thousand farm households in that area. The Department of Agricultural Extension at the local level helped to extend the technology very actively while Bangladesh Rice Research Institute also played a very active role to promote the technology. After that, in not only Monga months, farmers and day labourers are now getting jobs throughout the year. As a result, Monga has become a thing of the past.

Q: Please tell us about some of your other research works and innovation which may help the farming community and the country’s agricultural sector.

Then I’ve improved the technology by using the soil solarisation technique. Soil solarization is an easy and inexpensive method for controlling soil-borne pest and diseases, which involves in-situ solar pasteurization of soil using a piece of transparent polythene sheet and solar heat.

Under technical support from Dr. John Duxburry of Cornell University, USA, I have refined the technology and proved that farm households are able to produce healthier and taller rice seedlings easily within recommended 20-25 days under soil solarization techniques which is very simple and low-cost, where only a piece of polythene sheet is required and thus affordable for the poor farm households.

In addition, I’ve also developed the ratoon rice production technology as additional rice harvests from the same plant of boro rice. After harvesting boro rice, the land remains fallow around 70-75 days before the cultivation of Aman rice. Farmers may utilise this fallow period after boro rice harvest allowing rice ratooning during May through July by using very minimum cost and no irrigation is required.

Besides, I’ve re-introduced and popularized short-duration Aus rice cultivation, with both local and high yielding rice varieties in between boro and Aman season in fallow land by using rainwater for additional rice harvests, which has contributed a lot to ensure food security in the country.

Q: How far do you think the country’s agricultural sector developed in the last 50 years since independence?

A: During independence, food security was in vulnerable condition for the 7.5 core people. Now, we have adequate food for the 16 core people. This is the outcomes of agricultural research, development and extension. We should salute the farm households who feed the whole nation.

Q: What are the major challenges in this sector now and how do you think those can be overcome?

I’m now working with the University of Western Australia as Deputy Project Leader since 2017 and involved to develop salt-tolerant wheat and pulses variety and technology under joint collaborative programs between Australia and Bangladesh.

Under this Australia-Bangladesh partnership project, it is hoped that the BWMRI would be able to develop two salt-tolerant wheat varieties for the coastal area and BARI will be able to develop mungbean and felon pulse variety with improved technologies for coastal Bangladesh within a short time.

In addition, through this project, it was identified that the mungbean growers are selling their mungbean at a very minimum price at local markets and consume mungbean very little at the family level due to the non-availability of mungbean de-husking facilities in the community. The project is now installing a mungbean mini-mill at the community level on a pilot basis to ensure de-husking facilities, so that mungbean growers may be able to sell de-husked mungbean at a reasonable price, while family members will consume it, which will improve nutrition at the family level.