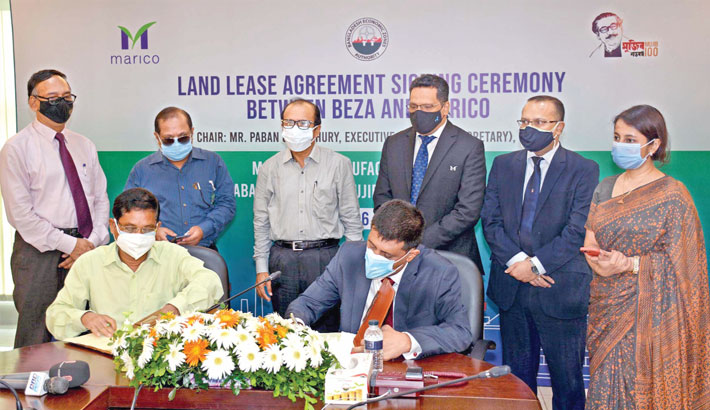 This will be Marico’s third factory which will produce cosmetics and PET bottles. Marico Bangladesh is a concern of Marico Limited.

Marico Bangladesh will invest around $26 million in the project, creating employments for nearly 500 people.

Paban Chowdhury congratulated the company for becoming a part of BSMSN. He said Bangladesh has been able to create an investment-friendly and healthy environment through the hands of the Bangladesh Economic Zone and has set a role model of development for the world.

Mirsarai is becoming one of the largest economic zones in South Asia, so it will lead to an unprecedented revolution of industrialisation in this country, he said.

“The investment is coming from different countries of the world at Bangabandhu Sheikh Mujib Shilpa Nagar due to its geographical and strategic locations. Marico has taken a place among them,” BEZA executive chairman said.

Marico Bangladesh managing director Ashish Gopal expressed his satisfaction over the promptness and efficiency of the services at the BEZA.

He revealed that currently 99 percent of Marico's portfolio is locally manufactured in Bangladesh.

“Marico has 36 brands in 10 categories and export products to South Asian and Middle Eastern markets.”

He said, “We are always striving to provide world class products to the local and international consumers as a proud ambassador of ‘Made in Bangladesh’.”

“We have set a target of investing more than Tk 2.2 billion to increase production and determined to further strengthen the portfolio by producing products locally,” Ashish Gopal added.