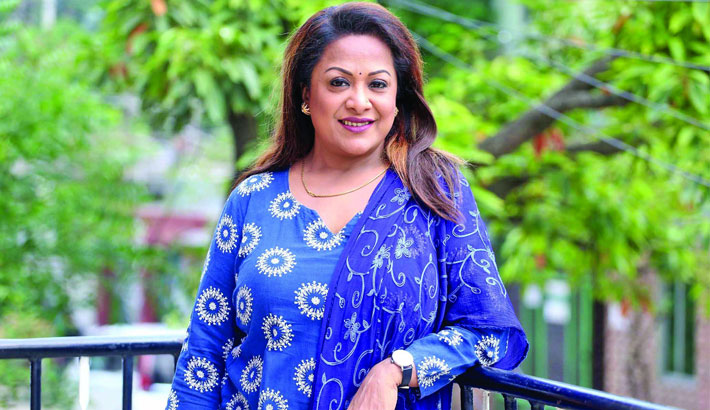 Popular film and television actress Aruna Biswas made her journey in the film industry through the film ‘Chapa Dangar Bou’ directed by Nayak Raj Razzak on June 6 in 1986. Since then, she has acted in numerous hit films during her 35 years career.

Besides films, Aruna also appeared on television dramas. She has also got success as a producer and director.

She directed her first TV serial ‘Onnorokomer Lojja’ for Channel i. Her last directorial venture was the short film ‘Thikana Bottrish’, which has been made on Father of the Nation Sheikh Mujibur Rahman.

Aruna is also a member of the Bangladesh Film Censor Board.

About her 35 years career in film industry, she said, “I’m lucky that I made my journey in the film industry through legendary actor Razzak. I’m grateful to the Nayak Raj family. Cinematographer Mahfuz bhai also helped me a lot at the beginning of my career. I’m truly thankful to my family member, co-artistes, director, producer, journalists and my fans for staying beside me.”

“Acting is my passion and I have gained so much love from the audience through it. I do not regret that I did not get the National Film Award. Because, my fans’ love is the best achievement of my acting career.”

Now, Aruna is preparing for her directorial venture on the big screen. She has recently submitted the script of the film titled ‘Ashambhab’ for the government grant.