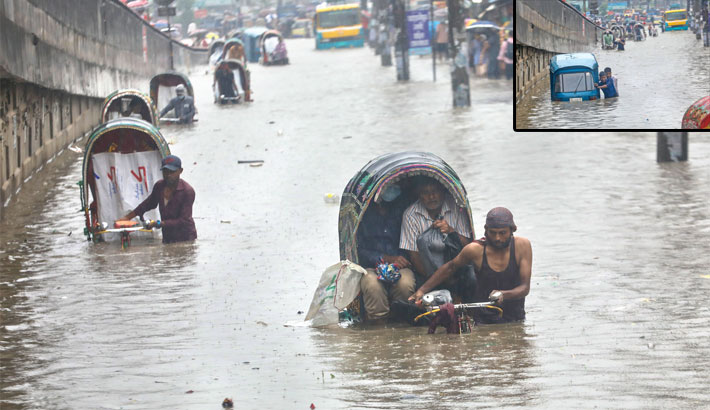 Rain, Pain In Frames - Most of the areas in Chattogram city go under knee-to-waist-deep water due to incessant downpour on Sunday, causing immense sufferings to the city dwellers. Rickshaw pullers pull their rickshaws in above waist-deep water on a road at Muradpur. Inset, an auto-rickshaw driver along with other pushes his vehicle out of the way in the rain after it stalled on the flooded road. —Rabin Chowdhury

Water entered many houses, commercial and business establishments during the heavy downpour.

Business activities at wholesale, markets including Chaktai and Khatunganj, were disrupted due to the waterlogging and inclement weather.

Commuters mainly the office goers and garment workers were the worst victims as many areas of the main thoroughfares went under knee-deep to waist–deep water resulting in acute crisis of public transport and tailback.

Healthcare services at Chattogram Maa Shishu O General Hospital were also hampered largely as its ground floor was flooded with rainwater.  Sources said the rain that started on Sunday early hours continued with some breaks. It intensified around 9:30am and continued heavily till filing the report in the evening.

Met office in the city’s Patenga area recorded a total of 79.4mm rainfall in 24 hours ended at 3.00pm on Sunday.

Moderate to moderately heavy rainfall may continue in some areas of Chattogram in the next 24 hours, said the Met Office Meteorologist and Forecasting Officer Dr M Shohidul Islam.

He also forecasted that due to the rainfall landslides may occur at places in the hilly regions of Chattogram.

Residents of these areas remained marooned at that time.  Loading and unloading of the bulk cargoes at the Chattogram port and its Outer Anchorage were hampered due to the inclement weather.

EH Rashed, a businessman and resident of city’s Halishahar area, said many areas and roads of the city submerged due to the heavy rainfall.