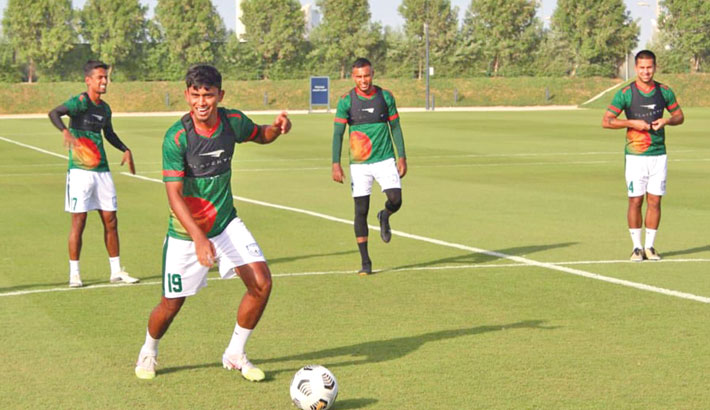 Bangladesh footballers are seen during a training session in Doha on Saturday. — BFF PHOTO

Bangladesh national football team have been working on defence strategies and improving compact in defence ahead of the big match of their joint qualifiers for FIFA World Cup 2022 and AFC Asian Cup 2023 against India tomorrow.

Bangladesh defender Rahmat Mia said that the defence side always faces challenges against big teams, so we have to take the compact in defence strategy against India.

“The defensive line faces big challenges against big teams because if the defenders make any mistake, then the teams concede goals. So, we have to concentrate on it. We have to make sure not to make any silly mistakes or defensive errors,” Rahmat told reporters on Saturday.

“The big teams always have a good attacking side. They can move the ball too fast. So, we have to be compact. I’ve played against India in the first leg. We know well about their attacking side and weaknesses. We are working on our technical meetings. Hopefully, we will have some points against them,” he said.

The match will take place at Jassim Bin Hamad Stadium in Doha at 11:00pm (BST). The men in red and green will face Oman in the last match on June 15 at the same venue.

Bangladesh assistant coach Stuart Watkiss also emphasised on defensive approach as the Indian attacking side have a great deal of pace.

“India have some very good players. I worked in India for a year in the I-League, so I have a little bit of knowledge about Indian players. I know they have a good attacking side; they have a great deal of pace. We’ve to be aware of that and make a plan for that in our game plan,” Stuart said.

“We had a really good start against Afghanistan. Afghanistan are higher ranked than us in world rankings, but our team showed their togetherness in the game. Indian team rank 80 or 85 plus places above us. We came close to Kolkata to beat India, but they equalised just five minutes before. If we play the same level, what we did against Afghanistan, then we will be optimistic that we can get a better result,” he said.

Bangladesh played a 1-1 draw with Afghanistan in their last match on Thursday. The men in red and green are still in the bottom in the five-team points table, earning just two points from six matches but they still have chances to topple India and Afghanistan and ensure a direct entry for round three qualifications of AFC Asian Cup 2023, scheduled to be held in China.

Indian side are also prepared themselves and they are not taking Bangladesh counterpart lightly. Indian defender Adil Khan said that they are confident enough to defend Bangladesh well.

“I’m confident to defend Bangladesh well as I defended Qatar well. Bangladesh are now doing well, they are improving their football. They did good fights; they have a lot of improvements. Besides, our defence is very good, we have held champions Qatar for a long time. Definitely, Bangladesh will give a tough fight in the game; it is going to be a good battle. We are ready for them,” Adil said.

The first leg match between Bangladesh and India ended in a 1-1 draw in October 2019 in India. In their last match, the 10-men India defended very well and conceded a 0-1 goal defeat to the hosts Qatar on Thursday.

“Team (India) are definitely confident after the Qatar match. I think the team will come with the blessings against Bangladesh,” the 32-year-old Indian defender concluded.

India received huge blow ahead of Bangladesh game as their midfielder Anirudh Thapa has tested positive for COVID-19 and is under quarantine in a separate room at the team hotel in Doha.

Thapa tested positive on Wednesday, a day before India lost 0-1 to Asian champion Qatar in its joint World Cup and Asian Cup qualifiers in Doha.