Be aware, not afraid to safeguard yourself from ‘Black Fungus’ 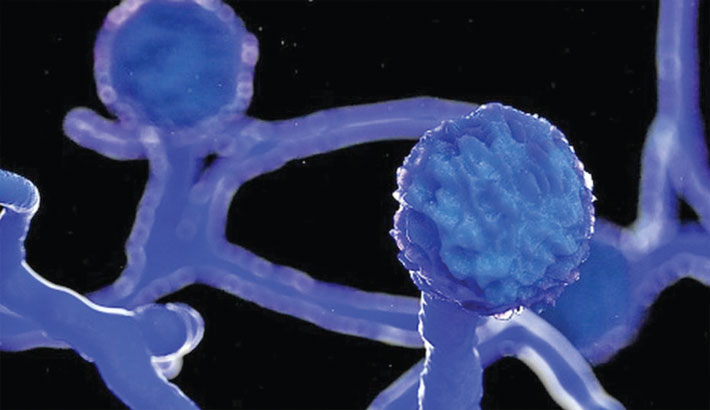 At a time when Bangladesh is struggling to cope with the Corona epidemic, the outbreak of deadly black fungus has raised concerns. The second wave of corona has spread a black fungus epidemic in India. In the meantime, the infection of white fungus has also taken a terrible form in India. India has declared public health emergency. Panic over the fungus is also growing in Bangladesh. Because, the Indian variant of corona has also been identified in Bangladesh. The government is vigilant so that this does not spread across the country. Government restrictions have been in place since April 5, preventing public gatherings which was extended week after week. Public health experts have advised people not to panic over black and white fungus. As a homeopathic researcher in Bangladesh, I had written a column on the topic. The deadly fungal disease has so far infected 8,800 people in India. Among them 219 people have lost their lives. Besides the Indian variant of Corona, a new panic the black fungus has also entered Bangladesh. One person has died in Bangladesh from it. ‘Black Fungus’ has become another blow in the Corona epidemic.

Black fungus is called mucormycosis in medical science. It is not contagious. Corona patients who have reduced immunity from excess steroid drugs have a higher risk of contracting the fungus. Infections of the eye can lead to nasal congestion, bleeding and blurred vision. Bleeding, burning of the eyes, swelling of one side of the mouth, blackening of the nose or gums, bleeding with the sputum at one stage, vomiting of blood, headache, toothache and neck pain. Black spots appear on the skin. In addition, pneumonia infections occur. The patient's ability to retain oxygen is reduced. As a result, shortness of breath increases. Symptoms of many patients infected with black fungus in Gujarat and Delhi are as follows:

The Black Fungus enters through the nose, increases nose and eye infections. This fungus can take up residence in the stomach. This fungus is always present in our environment. When the immune system is compromised then it appears as a disease. Especially those with uncontrolled diabetes have a higher risk. People who take steroids are also at risk of contracting it. The use of extra steroids in Corona treatment is the cause of later infection with black fungus. You also need to look at what kind of medicine the World Health Organization has prescribed. Black fungus infections can occur in various parts of the body, including blood, skin, mouth and nails, and are usually detected by blood tests. For those with high blood sugar or diabetes, cancer, liver cirrhosis, kidney damage, AIDS, etc. the situation can be terrible as it becomes a complex disease if they get infected with black fungus. Not all coronary heart disease patients may get this disease. The disease is more common in people who have been in the ICU for a long time due to coronary heart disease.

How to stay away from this terrible fungus:

These fungi spread in the environment, especially in soil, decomposed organic matter like fruit, leaves or animal droppings. Black fungus germs are naturally organic. So stay away from these and always stay clean. Always wear a clean mask, the same mask cannot be used repeatedly. The body cannot be kept weak. Need to do physical exercise. Get enough sleep. Drink enough water. Vitamin C, D and nutritious food should be taken. Avoid dusty places like construction or excavation sites, from where dust spreads, use socks with shoes. Do not walk barefoot. Do not touch damp walls. Wear shoes, long pants, long-sleeved shirt and gloves while working in the yard or garden. To reduce the risk of skin infection, clean the skin with soap and water if it comes in contact with rotten matter, soil or dust. Control blood-sugar levels.

Treatment of Black Fungus is based on the symptoms. It is possible to prevent this deadly disease. This should be done through clinical trials. The initial symptoms of black fungus and corona are mild fever, cough, pneumonia, shortness of breath or blood clots. There are plenty of medicines in homeopathy for precautionary measures, such as if the symptoms appear, or if corona is positive. The symptoms of corona are very similar to swine flu. Homeopathy has had huge success in treating swine flu. So there are enough homeopathic medicines to fight all stages of corona. But first of all you have to do a clinical trial. Because many people in our country are infected but there are no symptoms in their body. Therefore, clinical trials are very important and vital to deal with corona properly.

According to my knowledge of the history of homeopathic medicine, in the past epidemics were prevented by homeopathy. Thereby, we can deduce that the current corona epidemic can also be defeated. Although corona infection was declining, it suddenly started increasing again. Currently, the Covid-19 has become a global epidemic. Almost all the countries of the world including Bangladesh are affected by this virus. Although research on corona has been started in different countries of the world, practically no proper treatment has been discovered till now. No medical system in the world has been able to bring significant success in this treatment so far.

In the meantime, many corona patients have been completely cured through homeopathic treatment in various countries including Italy, Spain, Cuba and India. 35 patients including the priest of ISKCON temple were cured by homeopathic medicine in just seven days, which has emerged as a completely new effective medical procedure. There are many low cost homeopaths in different parts of the country. Some symptomatic homeopathic remedies are sufficient in the early stages of the symptoms and clinical impairments of the patient as a result of corona infection. Homeopathic physicians in Bangladesh have already seen success. As a result, we see that various government and non-government organisations, especially the police department, are receiving homeopathic treatments and recovering. Homeopathic treatment is available not only in the early stages of corona infection but also in extreme cases. Since no treatment for any stage of corona infection has been prescribed in the conventional medical system, these patients can be treated with symptomatic homeopathic remedies to help save the patient's life as well as restore the patient's health.

The success story of homeopathic treatment in previous epidemics has been universal. Homeopathic treatment cured scarlet fever epidemic in Germany in 1799. Hahnemann set the example for success in 1813, the typhoid fever epidemic had a homeopathic mortality rate of 1.11 per cent, while other treatments had a mortality rate of 30 per cent. There were cholera epidemics in Austria in 1831, in Cincinnati in 1849, in London in 1854, diphtheria in New York in 1862-1864, Spanish flu in 1918, dengue and chikunguniya in Bangladesh in 2018-2019. Even after so many successes, due to lack of publicity and facilities, it is not possible to run Homeo medical services in such a way. So I would like to draw the attention of the Hon'ble Prime Minister to introduce a homeopathic corona unit in every hospital like in the Central Police Hospital, to easily deal with this crisis successfully.

Homeopathy is an ancient medical treatment based on symptoms. Dr. Samuel Hahnemann is the initiator of this medical method. He introduced this method of treatment in 1896. He has successfully conducted treatment since 1805. We know that Covid-19 infection is caused by a virus. Therefore, the conventional medical system is unable to provide a cure. They will try to control the matter by making full use of the methods of management, hygiene, quarantine, etc. It's normal for ordinary people to panic. Homeopathy does not treat diseases but carries out treatment of the patient’s symptoms. So if an experienced homeopath can detect the complete symptoms of the patient's disease, Covid-19 and black fungus can be controlled through homeopathy in government homeopathic medical college hospitals across Bangladesh. All registered physicians are providing medical services to patients with coronary heart diseases through aconite nap, influenza, arsenic albumin, belladonna, bryonia, gelsemium, drosera, carbove, and many more. It is necessary to take the advice of an experienced doctor without using the medicine on your own.