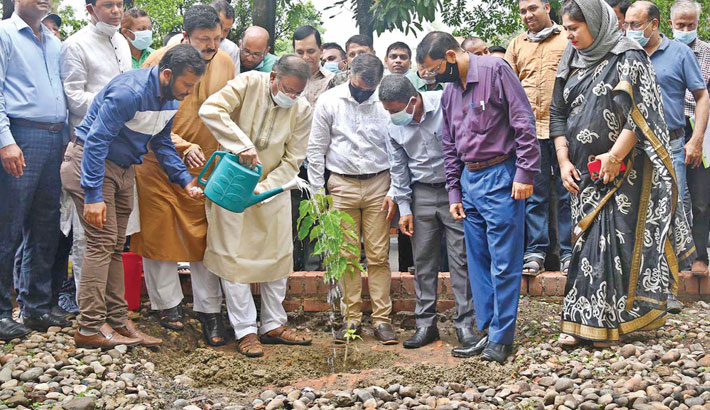 Information and Broadcasting Minister Dr Hasan Mahmud waters a sapling at a programme at Bangladesh Television Chattogram Centre on Saturday on the occasion of World Environment Day. —SUN photo

CHATTOGRAM: Information and Broadcasting Minister and Joint General Secretary of Awami League (AL) Dr Hasan Mahmud said that the responsibility of politicians is to teach good habits to the people, reports BSS.

“I urge all political parties to stand united against those who destroy the environment, work against nature and destroy nature. We need the world for us, but the world doesn’t need people for her,” he said.

The information minister stressed on creating social movement to save the nature for saving mankind.

“Nature will have to be protected not for its interest, but for saving human beings,” he said this as chief guest on Saturday while addressing a discussion on the occasion of World Environment Day at Bangladesh Television Chattogram Center. Mentioning many species are being extinct every day, Dr Hasan said, “For this we should protect the nature for our own interest and we need to create social movement in this regard. Then we will remain protected and the nature as well.”

He said that many species have come to the earth, they have become extinct, but the earth is fine.

Nitai Kumar Bhattacharya, General Manager, BTV Chattogram Center presided over the function while Abdul Awal Sarkar, Conservator of Forests, Chattogram region, Anup Kumar Khastgir and Deputy Chief News Editor of Bangladesh Television, among others, addressed the function. Dr. Hasan Mahmud said, “If two crore people of Dhaka city and about eighty lakh people of Chattogram city think that they will throw garbage here and there, the cleaners will clean it, then it will never be possible to keep the cities clean. That is why, as a student of environmental science and environmental activist, I request everyone to plant at least three trees each.

This is the slogan of Bangabandhu’s daughter Jananetri Sheikh Hasina.”

“Since the arrival of Bangabandhu’s daughter Sheikh Hasina in Bangladesh in 1981, the AL has been carrying out tree plantation programs all over the country through the Krishak League since 1983.

Everyone will plant a tree of fruit and herbal, this is her slogan,” he said.

“Where the financial value of a tree is immense, roadside afforestation is not wasted, the people guard it, because this social afforestation is owned by the people on the side of the road. It has been changed by Bangabandhu’s daughter Sheikh Hasina.

This has been made possible due to the dynamic leadership of the Prime Minister and the adoption of various social forestry programs involving the people,” he added.