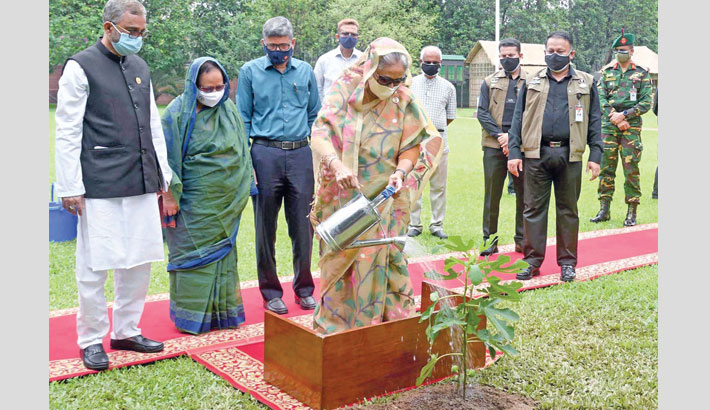 Prime Minister Sheikh Hasina on Saturday called upon the countrymen to plant more trees and take care of those to become beneficiary financially and avoid the adverse impact of climate change.

“Today I planted saplings and urged all of you to plant trees wherever you have the land available. It would be best if there is a possibility to plant three saplings –one timber, one fruit bearing and one herbal, otherwise at least one sapling,” she said.

The Premier made this call while inaugurating the “National Tree Plantation Campaign-2021” at her official residence Ganabhaban here, as World Environment Day was observed on Saturday in the country along with across the globe, reports BSS.

On this occasion, she also requested people to plant trees to promote greenery to guard the country from the adverse impacts of the climate changes.

“We’ll have to protect the environment as this is our country. If we want to defend the country from the adverse impacts of climate changes, we’ll have to promote greenery further in this green Bengal (Sabuj Bangla),” she said.

Sheikh Hasina noted tree plantation is the most suitable in all aspects such as for saving the environment and financial solvency.

Laying emphasis on taking care of trees, she said, “Only tree plantation will not be the solution, [We have to] take care of the trees so those can grow up. Tree would give benefit in many ways such as timber, fruits or medicine.”

Mentioning that Father of the Nation Bangabandhu Sheikh Mujibur Rahman has given the country’s independence, she said, “We want to build the country as Sonar Bangla. So, let’s come forward to carry out massive tree plantations and make our Sonar Bangla greener.”

Referring to the huge success of forestation, the Prime Minister said in the country, nearly 22 percent forestation has been done due to different measures of the government.

Earlier, she kicked off the “National Tree Plantation Campaign-2021” by planting saplings at Ganabhaban.

This year, the National Tree Plantation Campaign is being celebrated with the theme “Mujibborshe Angikar Kori, Sonar Bangla Sabuj Kori”, aiming to inspire people from all walks of life to fill Bangladesh with greenery in the “Mujib Year”.

However, the World Environment Day is being observed across the world this year with the theme “Ecosystem Restoration” adopted by the United Nations Environment Programme (UNEP).

On the occasion, the government expects that the people of the country, especially the young generation, would play a leading role in conserving the ecosystem and biodiversity.

The Ministry of Environment, Forest and Climate Change has undertaken various programmes through the Department of Environment (DoE) and the Forest Department to create awareness among the mass people in this regard.

The DoE has taken steps to publish supplements in the national dailies on this day.

Banners and festoons have also been installed in the city’s important places, installations and roads for encouraging people to plant saplings aiming to protect the environment.