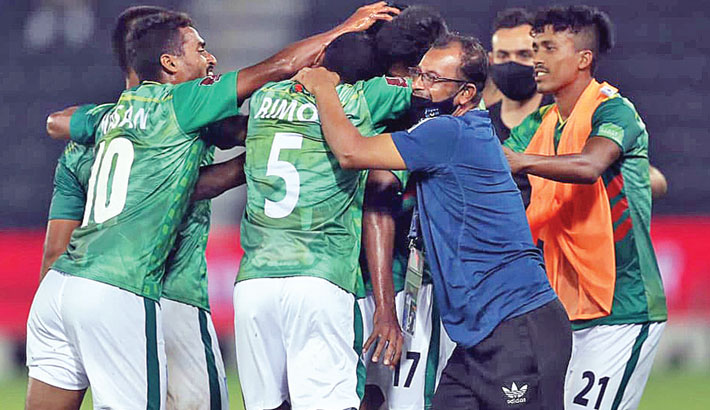 Bangladesh national football team will be boosted with full of confidence ahead of their remaining two matches of FIFA, AFC joint qualifiers against India and Oman after forcing Afghanistan to a 1-1 draw in their last match on Thursday.

Bangladesh will take on their South Asian rivals on June 7 in their penultimate match of Group E while they will face Oman in the last match on June 15 at Jassim Bin Hamad Stadium in the Qatari capital Doha.

The men in red and green are still in the bottom in the five-team points table, earning just two points from six matches but they still have chances to topple India and Afghanistan and ensure a direct entry for round three qualifications of AFC Asian Cup 2023, scheduled to be held in China.

India and Afghanistan have played the same number of matches as Bangladesh and they have three and five points respectively and if Bangladesh got some points from their next two matches, they have the opportunity to overtake them in the Asian Cup qualification race.

“We have the next game against India on June 7. If we want to play directly in Asian Cup, we obviously have to earn points from here. We are now full of confidence and hopefully, we will have a good result,” Bangladesh defender Topu Barman, who scored the equaliser against Afghanistan, said.

“All of us tried hard in yesterday’s (Thursday’s) match. Everyone has the best performance from their respective positions. I think our best achievement from yesterday’s game was teamwork,” he added.

Bangladesh head coach Jamie Day said that his team has to repeat the same performance against Afghanistan in the India game as the neighbouring team has proved their quality against Qatar despite losing the match by a solitary margin.

“We know it is gonna be an extremely tough game again and we are asking the boys to repeat that performance against India,” Jamie told reporters on Friday.

“They obviously had a very good performance yesterday (Thursday) against the strong Qatar team. Though they finally lost 0-1, they showed the quality they have in the team,” he added.

However, Jamie didn’t forget to credit his charges for their outstanding effort in the field that gave Bangladesh a crucial draw against a side who are 35-ranked higher than them in FIFA rankings.

“Very pleased with the performance last night and from the players, their efforts were fantastic for 90 minutes, showed attitude and worked great to keep going. We deserved to get the goal and the game opened up after that and I thought we were a bit unlucky not to win the game.

“I’m happy we got the point. We achieved a record for points in the FIFA World Cup Qualifiers and that’s something we can be proud of,” he added.

Bangladesh, however, suffered a big blow ahead of their final two matches as veteran midfielder Sohel Rana was ruled out from the games after he sustained an injury in his arm during the Afghanistan game on Thursday.

“We are disappointed to lose Sohel Rana for the next two games with the injury to his arms. He has been a good player and keeps his faith in the national team. But he gives someone else the opportunity to step in and play for the national team and show his capability for the international level,” Jamie concluded.