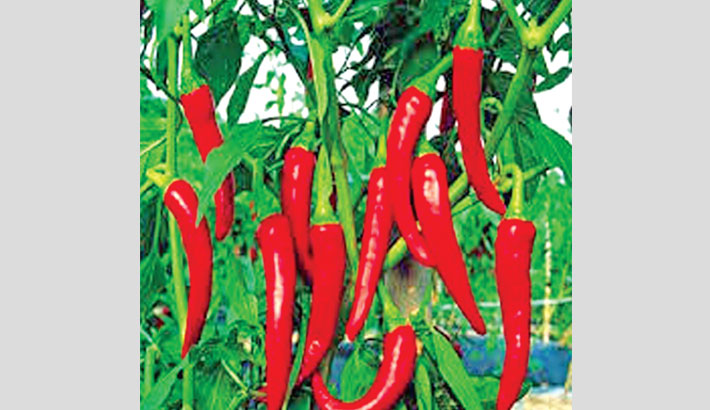 PANCHAGARH: Chilli farmers in the district are happy due to its bumper production and fair market prices during the ongoing harvesting season.

Traders from different districts including Dhaka, Narayanganj and Gazipur are coming to buy it from makeshift markets in Debiganj, Atwari and Boda upazilas of Panchagarh district where a maund (40 kg) of green chilli is selling at Tk 900-1000 and dried chilli at Tk 3,100-3,500.

A farmer can produce at least 30-35 maund chilli from one bigha of land.

Farmers have cultivated chilli on 1,250 hectares of land in five upazilas of Panchagarh district against the target of 1,110 hectares, said sources of the Department of Agriculture Extension (DAE).

The production target in the district is 1,460 tonnes and 780 tonnes of dried chilli.

Of the five upazilas in the district, Boda, Debiganj and Atwari upazilas of Panchagarh are more suitable for chilli cultivation, DAE sources said.

Farmers have started harvesting green chilli from the first week of May and it will continue till July.

Ragib Ali, a farmer of Debiganj upazila of the district said he cultivated chilli on seven bigha of land and earned Taka 2 lakh by selling chilli. Ragib hoped that he would earn more Taka 3 lakh during the season.

Mizanur Rahman, deputy director of DAE Panchagarh, said chilli cultivation is gaining popularity among the farmers in the district and the department has provided all necessary support to the chilli growers.

Ismail Mia, a farmer of Barabari in Debiganj upazila, said he cultivated chilli on 60 decimals of land and produced 70 maunds of chilli spending Tk 30,000. He got Tk 55,000 by selling the produce.

Kartik Paul of Kismat Rosea village in Atwari upazila of Panchagarh said he cultivated chilli on 60 decimals of land spending Tk 25,000 and produced 25 maunds of dried chilli. He sold it for Tk 60,000 at Fakirganj Haat in the upazila.

Cultivation of chilli is quite easy and usually less expensive than other crops, DD Mizanur Rahman said.

“A farmer can easily earn Tk 25,000 to Tk 35,000 by growing chilli in a bigha of land. It is possible to produce 30-35 maunds of chilli per bigha if the climate remains favourable and proper care is taken,” DD said.