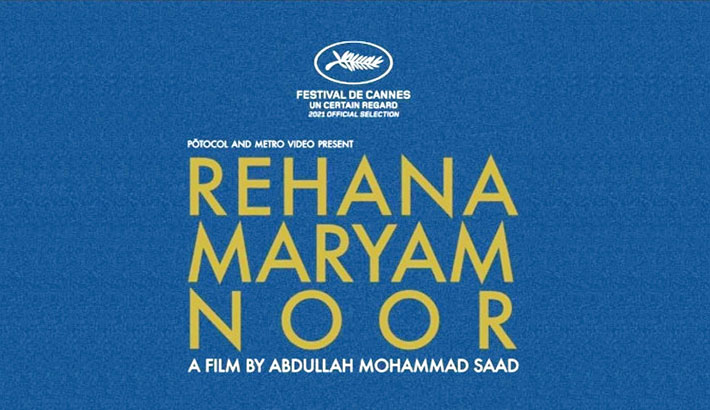 The 74th Cannes Film Festival has officially announced its selection of young Bangladeshi director Abdullah Mohammad Saad’s ‘Rehana Maryam Noor’, as one of the 18 films to be featured in its prestigious ‘Un Certain Regard’ section this year, reports UNB.

Following Thursday’s announcement, ‘Rehana Maryam Noor’ is set to become just the second Bangladeshi film to be showcased in a competitive section of the storied festival, arguably the most prestigious and celebrated film showcase in the world.

It is of course the first from Bangladesh to be chosen for Un Certain Regard, which translates to ‘From Another Angle’ in French, and features films that stand out for their unusual styles and often non-traditional storytelling.

Previously, late Tareque Masud-directed Matir Moina (2002) was the first Bangladeshi entry to be screened in competition at the festival, coming away with a prestigious FIPRESCI award.

The second directorial venture by talented filmmaker Abdullah Mohammad Saad, ‘Rehana Maryam Noor’s storyline narrates the tale of the eponymous private medical college teacher who becomes the witness to an unexpected incident while leaving the college one day. Being awestruck with the incident, Noor starts to protest against the incident and the system, as the story moves forward.

Apart from being the director, Saad also wrote the screenplay. His maiden directorial venture was the much-acclaimed film ‘Live From Dhaka’ (2016).

Official website of Cannes stated that on Thursday, noted French journalist Pierre Lescure and Cannes and Lumiere Film Festival director Thierry Frémaux presented the Official Selection of the 74th Festival de Cannes at the UGC Normandie in Paris. This year's festival is scheduled to take place from July 6 to 17 in Cannes, France.